CAMBUSLANG HARRIERS HOST THEIR ANNUAL DOWN BY THE RIVER RACES 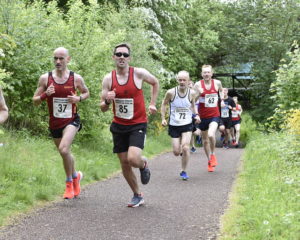 In the officially measured 10K race the hosts dominated the male prizes while the ladies prizes were more evenly spread out.  Cambuslang took the first 3 race places in the menâ€™s event thus ensuring team victory.  Fraser Stewart successfully defended his title to record an impressive time of 31.49 which broke his own course record by 41 seconds and secured him a bonus prize courtesy of Barnie Gough.  Last yearâ€™s 4th finisher Colin Reilly (32.46) was a comfortable runner up with club captain Iain Reid (33.07) in his first race since the London Marathon securing 3rd place 4 seconds ahead of fellow master athlete David Millar of Irvine AC.   Iain received the 3rd individual award with David taking the M40 race prize.  Cambuslang athletes also took the under20, M50 and M60 prizes thanks to Andrew Carey (34.50) with a massive pb, Mark King (37.33) and Des Dickson (39.53). 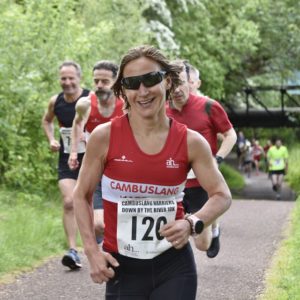 In the ladies event Mary McCutcheon of Giffnock North was first home in a time of 39.35 followed by Cambuslangâ€™s Kirsty Oâ€™Brien (42.02) and in 3rd spot was unattached runner Debbie Comer (42.25).  The 4th lady to finish and recipient of the W50 prize was Bernie Oâ€™Neil (42.54) of the home club while Evelyn Struthers (43.08) of Hamilton Harriers was awarded the W40 prize and unattached Erica Christie (44.15) the W60 prize.  Morgan Beaton of Calderglen Harriers lifted the under 20 ladies prize.  Lesley McArdle, Cambuslangâ€™s 3rd female counter clinched team victory for the hosts. Both male and female race winners, Fraser and Mary, were presented with the Jimmy Sands Memorial Shields in honour of former member Jimmy who won a Paralympic gold medal in 1988.  The inaugural Jim Fitzpatrick Masters Memorial Shields in honour of a former long standing member and patron of the club went to Iain Reid and Bernie Oâ€™Neil. 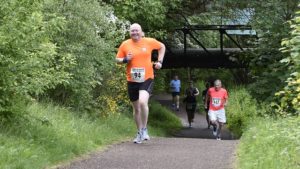 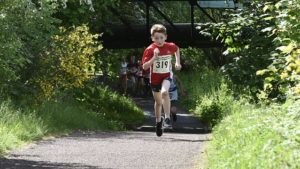 Special thanks are due to our members, parents and supporters who assisted in the pre race organisation and on the day itself and to Colin Stephen who vividly captured on camera both races.
https://www.flickr.com/photos/131646731@N07/albums/72157708726579404/page1 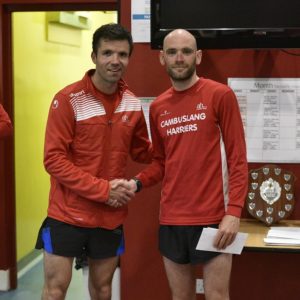