The course for this year’s Scottish Cross Country Championships at Callendar Park Falkirk was more akin to the terrain at the First World War One Battle of Passchendaele or the Battle of the Mud as it is commonly referred to.  The war poet Siegfried Sassoon had written “I died in Hell.  They called it Passchendaele”.  Given the extreme muddy conditions all athletes had to run in it would be appropriate for them to say “I ran in hell.  They called it Callendar Park”.  Therefore, everyone who participated deserves a medal for competing and Scottish Athletics and the home club hosts Falkirk Victoria supplemented by volunteers from other clubs deserve a big vote of thanks for ensuring that the event went ahead. 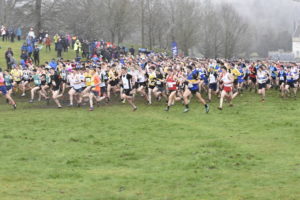 While Cambuslang did not return with any team medals, in spite of our male and female athletes’ best efforts, Moira Stewart took the individual bronze medal in the senior ladies race.  Moira is resident in the Czech Republic but is eligible to represent the club on account of her Scottish father Eddie who was a Scottish internationalist in his younger days and has won Scottish Masters Cross Country titles in the M40,45,50,55 and 60 categories.  She is the current Czech cross country champion and confessed after the event that she had never run before in such muddy conditions. 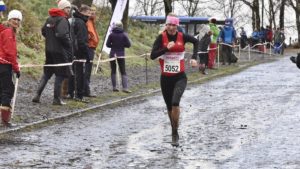 The under 13 girls had the pleasure of starting the proceedings and Hayley Clarke, Lucy McGrandle, Olivia McNicol and Grace Ferry combined to finish 16th team while the under 13 boys quartet of Sam McCarthy, Reece Duncan, Jay Gallacher and Chris Black were 14th team.  Lewis Cook and Dylan Stefani supplied the back up.  The under 15 girls ably led by Abbie McClue and with support from Eva Ritchie, Mya Carmichael and Morvern Crawford recorded 11th place.  Their under 15 male counterparts were 9th team thanks to Lewis Roddis, Fearghus MacGregor, Zak Haggerty and Finlay Robb with Jonathan O’Kane being the club’s fifth finisher.  It was pleasing to see Lewis competing again after a long lay off due to injury. 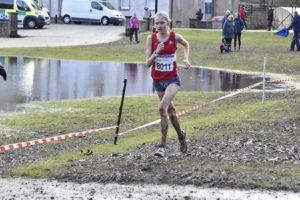 Only three runners were required to make up a team in the under 17 ladies event and with Susie McLaughlin inside the top 20 finishers and Shona Carey just outside the top 20 along with support from Peggy Nan Rodgers the trio achieved 7th team spot.  The under 17 male quartet of Michael Black, Brodie Aitken, Aaron Grew and Sean Friel were in 5th position with Joa Fairweather and Liam Angley following them home.  Michael in 12th place delivered his best run of the season.  Unfortunately two of their team mates Jack MacKinnon and Zak Povey could only look on due to injury and illness. 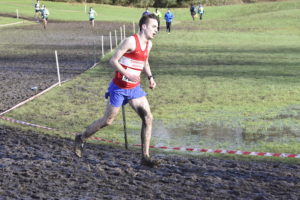 Rachel Wardrope was the sole club representative in the under 20 ladies race and she showed great determination throughout her race to cross the finishing line.  The under 20 men were well represented with 6 athletes on the starting line.  Their counting quartet of Chris McLew, Struan Paton, Andrew Carey and Ryan Donnelly were in 6th place with Keir Crawford, and Kai Newell in support. 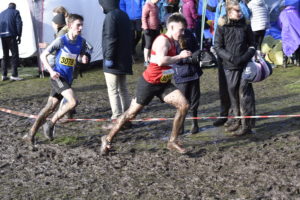 For the first time in the history of these championships the senior women were given parity with the men and therefore 6 athletes were required to complete a team.  Unfortunately Cambuslang could only field 4 athletes.  Moira, Kirsty O’Brien, Lynn Angley and Lesley McCardle all put in strong performances while having to contend with the additional problem of heavy hail showers. 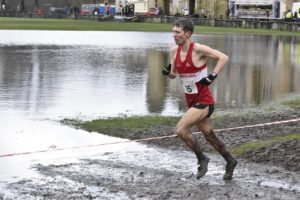 The final event of the day was the senior men’s race with the weather further deteriorating.  Cambuslang’s men had taken the silver medals the previous year but unfortunately due to injuries and illness 3 of their counters were sidelined.  In spite of a valiant effort the seniors had to settle for 6th place.  From a large field of 670 competitors the Cambuslang sextet of Fraser Stewart, Craig Jardine, Alasdair Campbell, Ryan Thomson, Gavin Smith and club captain Iain Reid occupied positions 20, 23, 28, 37, 46 and 55.  Spare a thought for Craig who while inside the top 10 with just over a mile to go had a shoe come off.  Next in line came Colin Reilly and Kenny Campbell respectively in 69th and 74th positions with a succession of red and white vests to follow in the following order of Stuart McGeachy, Johnny MacNamara, Mick O’Hagan, Dave Thom, Graeme Gallie, Iain Nicholl, Tony McCutcheon, David Marshall, club president Des Dickson, Mark Gallacher, Dan O’Connell, Simon Gold, Iain Crawford and David Stirling. 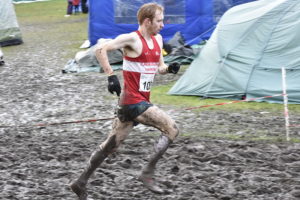 Cambuslang’s male athletes did their best to retain the AT Mays Trophy awarded to the best male club in the 5 different age group categories but in the end had to give way to Giffnock North while finishing 2nd in the overall male teams placings ahead of Dundee Hawkhill.

The consensus among everyone at the championships, whether being a runner, coach, official or a supporter, was that everyone deserved a medal.  Well done to all our athletes, coaches, officials and supporters.  Many thanks also to Dan for transporting the large tent and to Brian Hughes and John Paul Murphy for responding to Scottish Athletics call for stewards and finally to club photographer and coach, Colin Stephen, for vividly capturing our athletes battling the elements.