Ronhill Cambuslang Harrriers men successfully defended their under 20, senior and mastersâ€™Â  west district team titles held over a testing muddy course at Kilmarnock. Â There was team success too for our under 20 ladies.Â  Individually Sarah Benson finished a good second in the senior ladies race, Kerry-L I AM Wilson and Jamie Reid were first and third in the over 40 competition with club debutant Paul Thompson first in the over 50 category while Grant Sheldon and Ryan Thomson were 2nd and 3rd respectively in the under 20 menâ€™s event.Â  Although no medal was awarded Frank Hurley was the first over 60 to cross the line. 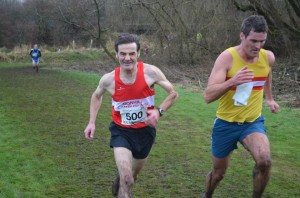 Anna Borland gained useful experience in the under 13 girls race while the under 13 boys team of Christopher McLew, Drew Pollock and Ruairidh McGregor just missed out on bronze medals by 1 point.Â  Our under 15 girls and boys both finished in 5th position with Niamh Brown, Lauren Carey and Olivia Mullholland counting for the girls and Struan Paton, Gavin Smith and Kier Morton being the male counters. Â In the under 17 girls race Eve MacKinnon finished a very creditable 4th against tough opposition.Â Â  The under 17 boys team of David Robertson, Jack McGregor and Sean Reilly were also just outside the medals in 4th place.

However, the medal tide began to turn when moving into the older age groups.Â  Katie Bristow in 4th place led home Mairi Brown and Sarah Miller to gain the clubâ€™s first ever team victory in the under 20 competition.Â  Their under 20 male counterparts also won team gold thanks to strong runs from top Scottish triathlete Grant Sheldon in second place, Ryan Thomson 3rd and Ross Stephen 6th , the latter two being first year in that age group.Â  Success continued with Sarah Bensonâ€™s silver senior medal being the clubâ€™s first female individual medal in that age category. 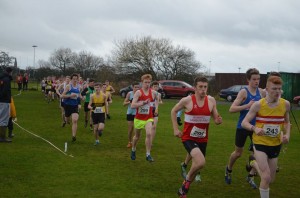 Grant and Ryan in action in the U20 race

In the final event of the day the senior men packed extremely well at the front to convincingly win and retain the team title.Â  Victory was assured with Iain MacCorquodale 5th, Robert Gilroy 8th, Ben Hukins 10th, Stuart Gibson 11th,, Kerry-L I AM Wilson 12th, and Stewart Orr 13th .Â  Likewise the over 40 trio of Kerry-L I AM Wilson, Jamie Reid and Paul Thompson grouped well to clinch team victory.Â  It is interesting to note that the club had 21 finishers in this race which was by far the highest number of finishers from any of the clubs participating.Â  However, it would be good to see more athletes competing in both the younger male and female events. 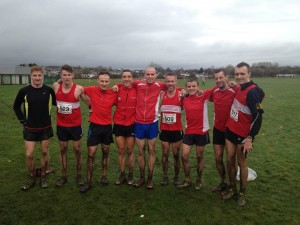 A big thanks go again to our coaches, parents and supporters who gave excellent vocal support and active encouragement on the day to all of our athletes. Pics taken on the day can be found on our Facebook page.