Down by the River 10K and 3K Races Sunday 3rd March

Ronhill Cambuslang Harriers held their annual open 10K and 3K races on Sunday.Â  Conditions for running were good with no real wind for the record field of 118 participants in the 10K to contend with.Â  Straight from the gun the race developed into a battle between the Cambuslang duo of Davy Munro and Robert Gilroy and remained so throughout the race. 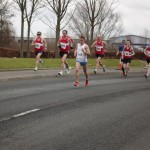 It was only in the final 200 metres that Davy managed to open a gap over the gallant Robert.Â  Davyâ€™s winning time of 32.41 was a personal best.Â  With Scottish over 50 veteran champion Dave Thom in 5th place and first in his age category the home club not surprisingly secured the team title.Â  Over 60 national champion Frank Hurly confirmed his status in his age group by finishing an excellent 7th.Â  There were further successes for the harriers when Ross Stephen in his first ever 10K won the under 20 prize and duathlete and triathlete Kirsty Anderson was runner up in the womenâ€™s race behind Louise Mitchell of Bellahouston Hariers. 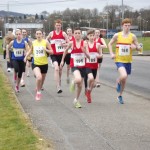 Although the open 3K was won by Lawâ€™s under 17 runner Luke Foss the two Cambuslang under 13 runners Ryan Stephen and Drew Pollock gained second and third in the male category.Â  Both were counters for the club in their recent victory in the under 13 Scottish Cross Country Championships.Â  Central ACâ€™s Emily Greenan was the victorious female athlete ahead of Cambuslangâ€™s Lauren Carey with Shettlestonâ€™s Amy Harkins third.

The club would like to thank their two sponsors of the 10K â€“ former club member Jim Fitzpatrick of Macdet and the Glasgow based Achilles Heel running shop.Â  Many thanks also to club member Barnie Gough for his sponsorship of the 3K race.Â Â  The roles played by Owen Reid as clerk of the course and Colin Feechan as race secretary along with the efforts of club volunteers who helped to make the races go smoothly were greatly appreciated.