A Successful End to the Cross Country Season

The final event of the cross country season took place at Livingston on Saturday in the formÂ of the Scottish Road Relay Championships and Ronhill Cambuslang continued their successÂ with two team gold medals and one bronze award.

The club had a number of athletes missing due to injuries and to the event taking place
over a holiday weekend. Our resources were further stretched due to the inclusion of an
inaugural 4 man over 50 championship. Nevertheless, the vet over 35 and over 50 teams
secured decisive victories with the junior/senior men gaining the bronze medals for the 3 rdÂ consecutive year. 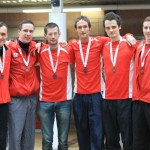 Jack Hamilton in his final race as an under 20 finished a respectable 5th on the first leg to
hand over to debutant Josh Lilly. Josh pulled us up to 3rd position one second ahead of
Corstorphine in the 2nd fastest long stage of the day. Al Campbell who had been called in
as a reserve showed that he has wintered well in clocking a pb and only losing 10 seconds
to his Corstorphine rival. Ben Hukins maintained 4th place but importantly closed in on
3rd placed Kilbarchan. Davy Munro then eased us into the bronze medal spot and club
captain Stuart Gibson consolidated the bronze medal position behind very strong Central
AC and Corstorphine teams. A special mention must be made to Jack, Davy and Stuart whoÂ are only recovering from recent illnesses and to Ben who has had an ongoing foot injuryÂ which has restricted his training. Our 4 runners in the B team â€“ Donald Macaulay, ShazadÂ Hakeem, Bobby Bristow and Dan Oâ€™Connell â€“ also acquitted themselves well. 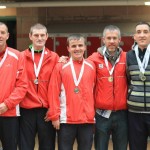 It was a similar story for the vet over 35 team as Alan Ramage and Mick Oâ€™Hagan have beenÂ struggling with respective achilles and back problems. However, Alan was able to handÂ over the vets in 5th place in that category. Greg Hastie then delivered a strong long leg toÂ put us into a lead which was greatly extended to almost 6 minutes at the finish by JamieÂ Reid, Kerry Wilson, Mick and Robert Gilroy. Kerry and Robert had the double satisfaction ofÂ recording the fastest and 2nd fastest long legs by a vet runner with Greg 4th fastest. Also inÂ finishing in 6th place overall the club gained their 3rd consecutive vets title. 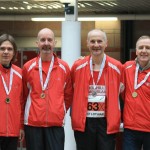 In the new vet over 50 event Ian Williamson and Dave Thom were the bookends with Colin
Feechan and Alick Walkinshaw providing able support on legs 2 and 3 to secure victory by
almost 3 minutes. Both Ian and Dave recorded the fastest over 50 times for the short and
long legs respectively. It was good to see Ian who incidentally was a member of our winningÂ team in 2000 competing again after a long spell of injuries. Congratulations also to AlickÂ who in his first year with the club won his first Scottish medal and thanks to Colin who ran in spite of a heavy cold.

Katie Bristow was our only female representative and she ran a very strong first leg to finishÂ in 4th place and 7th fastest overall on the day.

There was further success for the club when Eddy Stewartâ€™s daughter Moira finished 2 nd inÂ the Czech under 20 cross country championship with his son Gerron 18th in the under 15Â boysâ€™ event.

A big thanks to all our athletes, coaches, officials, parents and supporters who have all
contributed to a most successful cross country season for both the male and female teamsÂ across the age groups.