The summer season began on a high note for Ronhill Cambuslang Harriers. On an unusually warm Easter Sunday the club won team gold in the Scottish 10 mile road championship held at Strathclyde Park in conjunction with the Tom Scott Memorial 10 mile race. Robert Gilroy in 4th place with support from Kerry-Liam Wilson and Stevie Wylie in 10th and 11th spot were the 3 club counters. Unfortunately Bobby Bristow in 12th place and only 1 second behind Stevie missed out on a Scottish gold medal. Bobby, however, had the consolation of recording a personal best time of 53.46 for the distance. Kerry-Liam and Stevie also gained individual silver and bronze medals in the 040 category behind Irvine’s David Miller. Kerry-Liam had twice previously won the vet race and Stevie the open race both in 1993 and 2003 with times of 47.29 and 48.25. Although Robert surrendered his Scottish title he had the consolation of reducing his pb to 51.02 as well as winning team gold. Shettleston finished 2nd team with Bellahouston Harriers packing well to secure a well deserved 3rd place in the Scottish team championship. In the individual event Craig Ruddy from Inverclyde AC dug deep to hold off Shettleston’s Tewolde Mengisteab with Corstorphine’s Michael Crawley not too far adrift. 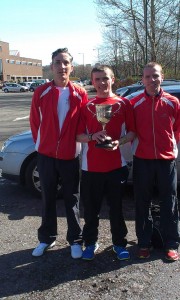 The club had 9 other athletes completing the course. New member Willie MacRury in 56.01 and George Pettit in 57.36 both smashed their pbs by 6 minutes while James Healy, Colin Feechan and Alick Walkinshaw also recorded personal bests. Dan O’Connell 63.19, Justin Carter 65.59, David Stirling 79.39 and John McLuskey 83.05 all made their debut at this distance.

Elsewhere over Easter Alasdair Campbell won the Pollock 5K Parkrun where Des Dickson recorded a pb as did Justin Carter at Strathclyde Park. Both David Fearweather and Kirsty Grant also made a welcome return to competition there while Eddie Carr made his debut in an ultra distance event to successfully complete the Glasgow to Edinburgh race. David Cooney