The club fielded an M35 6-man team and a 3-man M55 team along with an incomplete over M35 B team at the British Masters Road Relays at Sutton Park, Birmingham on Saturday 16th May. The long journey was made worthwhile as the M55 trio won team gold and the M35 sextet team silver.

The M55 race kicked off first with Paul Thompson on the opening leg. Paul was nervous considering he had had a bad experience last year when he was forced to stop and withdraw from the race on the final leg due to being unwell. On top of that he had been nursing a hamstring injury over the last month and had not trained much. His aim was to run steadily round the course and to hand over to Colin Feechan without putting too much pressure on his hamstring. Paul executed his plan very well to run his own race and finished 6th in 17:43 for the tough undulating 3 mile course. Colin had been assigned to work his way through the field and he brilliantly turned a 40 second deficit on the leader into an impressive 53 second lead. His clocking of 17:10 was the 3rd fastest time of the day which was only a few seconds slower than the first 2 finishers on leg 1 who had the benefit of an open race situation. It was left to Iain Campbell to anchor the squad to victory. Iain too was nervous not having raced for a year. However, as always he gave his usual 100% effort and increased our lead at the finish to 74 seconds with a time of 17:32 seconds. Last yearâ€™s winners Woodford Green overhauled Wirral in the closing stages to settle the silver and bronze medals.

The final race of the day saw the M35 and M45 runners compete for their respective awards. We had initially planned to field an over 45 quartet but this fell through as Charlie Thomson was drafted into the over 35 team from the older age group. Charlie and Scott Hunter for the B team led off. Charlie after a long period of injury had been getting himself fit again and had enjoyed some testing Saturday morning training reps with Stevie Wylie and was keyed up for the challenge ahead. Unfortunately things did not work out as planned as he finished in 57th place with a time of 17:26 with Scott 69th in 18:06. Anyone who knows Charlie will know that he does not offer any excuses but I will on his behalf. He had not been feeling 100% on the journey down the previous evening and on the morning of the race and obviously this was a mitigating factor. Over 3 decades Charlie has consistently put in inspiring and gritty performances to significantly help the club win medals at local, district, national and UK level. It was to be payback time for the remaining 5 runners to get the club back into the race and then into a medal position.

Robert Gilroy was now to take up the daunting challenge of eating into a 2 minute 25 second deficit behind the leader and 1:57 deficit behind eventual winners Thames Hare and Hounds. Undoubtedly Robert was the man for the task as he sliced through the field overhauling 48 runners to put the club into 9th place. Robertâ€™s time of 14:47 was not only a club record taking 4 seconds off John Cowanâ€™s time but was to be the 2nd fastest time of the day beaten only by Morpethâ€™s in form Ian Hudspithâ€™s 14:31 on leg 4. The club was now 1 minute 26 seconds behind the leading club Thames Hare and Hounds. Debutant Frank McGowan making his comeback to the sport after a long break gained 22 places for the B team with an encouraging time of 16:44. Hopefully his performance on limited training will encourage him to train and compete more.

Jamie Reidâ€™s plucky 16:16 stint, the 6th fastest on this leg, moved us up to 8th position and closer to the teams immediately in front although THH had increased their lead to 1 minute 57 seconds with Salford only 1 second behind. Mick Oâ€™Hagan gained another 9 places for the B squad with a time of 17:31. By halfway multi Scottish Masters Champion Kerry-Liam Wilson had put us into the bronze medal position and reduced THHâ€™s lead to 1 minute 23 seconds and 2nd placed Salford to 51 seconds. Kerry was rewarded with the 2nd fastest time on his leg.
Iain Reid with 15:47, the 2nd fastest on leg 5, continued RHCâ€™s comeback to snatch 2nd place from Salford in the closing stages and to cut back THHâ€™s lead to 53 seconds. Stevie Wylie now set off on the last leg in pursuit of the leader while fending off an early counter challenge from the Salford runner and from the advancing Preston Harriers. Although Stevie ran 15:36 and the 2nd fastest leg as he closed the gap on THH to 24 seconds at the finish, he had run out of distance, but silver medals had been secured in what can only be described as a dramatic comeback. Spare a thought for Salford who had been in a medal winning position throughout the race until the last 400 metres when overhauled by the fast finishing Preston runner Robert Affleck.

Both results were testimony to the strong club spirit and competitiveness of our runners. Thanks also to Owen Reid for his support on the day and to Colin who dealt with the team entries, travel and accommodation. It also continued RHCâ€™s excellent record in this UK championship with the club having won 7 gold, 3 silver and 3 bronze medals across the age groups in recent years.

It was good to meet up with 2 of our athletes living in England Kenny MacPherson and Neil Wilkinson who now in the M45 category ran 16:26 for Tynebridge and 16:49 for Morpeth.

Well done also to The M35 Kirkintilloch Olympian team of Graham McCabe, Stephen Allan, Robert Keenan, Howard Elliott, David Hogg and Louis Oâ€™Hare who finished a creditable 10th on their debut. Perhaps more Scottish clubs will participate next year and RHC will be able to field teams in the M35, M45, M55 and M65 age groups! 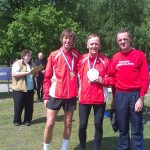 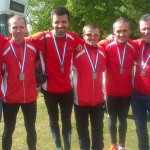