A DOUBLE VICTORY FOR CAMBUSLANG HARRIERS

In spite of a number of late changes due to injuries the Cambuslang Harriers M35 and M50 teams managed to win their respective age groups while the W35 team finished a creditable 5th. 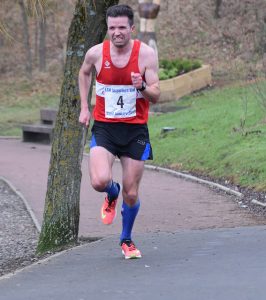 After finishing a close 2nd on the opening leg thanks to Gordon Robertson (19.05), Iain Reid‘s 18.57 clocking took the club into the lead.  Ben Hukins (19.27), the day after his hill relay, extended the lead to give Robert Gilroy the glory leg.  Robert’s time of 18.40 was the fastest of the day to give Cambuslang a commanding victory of almost 4 minutes over new club PHRC.  The M50 team of Des Dickson (21.26), Colin Feechan (21.36), Dave Thom (21.57) and Chris Upson (20.49) were tested more with Shettleston just behind them going into the last leg.  However, in spite of Chris still having the previous day’s hill run in his legs he opened up a decisive gap over our local Lanarkshire rivals.  Our ladies trio of Bernie O’Neil (24.11), Erica Christie (25.00) and Jennifer Reid 23.50 combined well to achieve 5th place in a highly competitive ladies’ competition.  The ladies B team’s times were very close together with Claire Mennie recording 26.03, Julie Dell 26.04 and Lyn Angley 26.13 to give them a 10th place finish. 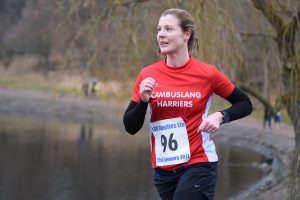 There were many other good performances from the club with the B M35 team of Frank McGowan, Brian Douglas, Paul Kernohan and Justin Carter and the M50 team of Alick Walkinshaw, Frank Hurley, Dan O'Connell and Eddie Carr being the first B teams in their age groups over the line.  The other 2 full teams of Michael Barker, Brian Campbell, Simon Gold and Mick O'Hagan along with Shaz Hakeem, Scott Hunter, John Kelly and David Stirling also competed well while due to the call offs Iain Burke had no one to hand over to after his first leg run. 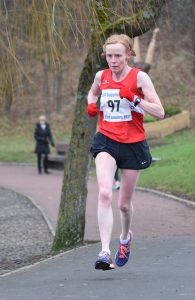 Apart from having a good turnout of runners it was also encouraging to have numerous supporters including a number of our younger runners to cheer on the “old yins”.  Many thanks again to Colin Stephen who captured all our runners in action. 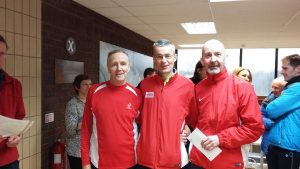