Cambuslang Harriers took part for the second time only in the Devil Burden’s Hill Relay held at Falkland on the 21st January and were rewarded with an excellent 3rd place behind the more experienced hill running clubs of Shettleston and HBT.  Although there are only 4 stages 6 runners are required as the two middle legs are run in pairs.   Team manager Chris Upson managed to put together a team in spite of pre race doubts about a few runners due to injuries, colds and travel plans. 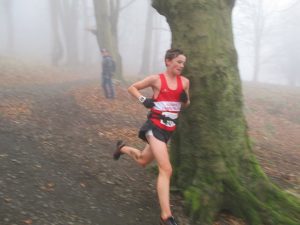 Chris elected to do the opening leg of 7.5K with 220m of ascent and brought the club home in a very respectable 8th place.  Alasdair Campbell and Ben Hukins ran strongly in the misty conditions to pull in a few places running the 3rd fastest stage time for the 10k/680m leg.  Alasdair had recently shown good form on the hills in finishing 3rd from a strong field in the Tinto Hill race while Ben has had a successful summer trail running season.  They handed over to former club captain Iain MacCorquodale whose recent training and racing have been severely curtailed due to injury and to Colin Donnelly, multi hill running champion at Scottish, UK, European and World senior and master levels.  Unfortunately Colin too has been recently sidelined due to injury and on the day was suffering from a heavy cold.  Nevertheless, they stuck manfully to their task over the longest stage of 11.5k with 410m of ascent to give our final team member the chance to chase the teams immediately in front.  Joshua Boyle, although still an under 17 athlete has twice represented the UK U20 hill running team, ran a storming leg over 5K/390m to bring the club home in a surprise 3rd place.  This was a remarkable run by Joshua as he had only returned the day before from Dubai and then had driven up with his parents James and Helen from their home in the north of England on the morning of the race.

Great team commitment and excellent organisation by Chris had been duly rewarded.  However, both Chris and Ben now had the masters’ road relay around Strathclyde Park to face the next day which would test their powers of recovery.