Apologies for the report being a week late, webmasters fault, not Dave Cooneys.

Cambuslangâ€™s Grant Sheldon was one of the pre race favourites to lift the Scottish Menâ€™s 10K Road Championship at Stirling having been victorious in 2017 and runner up in 2019.  The quality of the assembled field of over 600 runners was enhanced by the inclusion of teams from the English Midlands and Northern Ireland.  Normally in this event a large group of athletes will run together for the first 3 to 4 kilometres before someone attempts a breakaway.  However, this year Omar Ahmed, an Ethiopian running for the East Midlands, sprinted into the lead from the off.  Only Grant and his co-favourite for the Scottish title, Jamie Crowe of Central AC, went with him.  The 2 Scots grimly hung on before Jamie dropped off the pace at 3K and then Grant at the 4K mark.  This order was maintained to the finish with Omar breaking the course record in the superb time of 28 minutes and 53 seconds and Grant taking the Scottish title in a time of 29.27 seconds thus taking 64 seconds off his pb.  The Scottish silver medal went to Centralâ€™s Jamie Crowe and with his club mate Alastair Hay in the bronze medal position and 3rd counter Conan McCaughey in 9th spot it was no surprise that the team victory went to Central AC ahead of Fife AC and Cambuslang.  Fraser Stewart and club captain Iain Reid helped to clinch the team bronze position.  The ever improving Fraserâ€™s excellent time of 30.51 was a pb by 30 seconds and Iainâ€™s solid 32.24 clocking showed that his training was on schedule for hopefully a good performance in the October Berlin Marathon.  In achieving team bronze Cambuslang Harriers extended their distinguished record of now having won 10 consecutive team podium medals – 3 gold, 3 silver and 4 bronze. 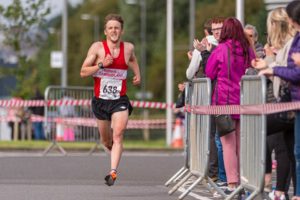 There was also a number of other good displays by the harriers including in order of finish  Craig Jardine only 3 seconds off his pb, M45 Stevie Wylie, U20 Andrew Carey, U17 Michael Black with a 61 seconds pb, M45 Richard Cooper, M60 Des Dickson, M40 Graeme Gallie breaking 40 minutes for the first time and club coach Iain Crawford. 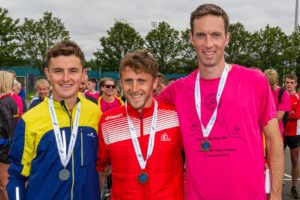 On the same day U20 Ryan Donnelly won the 3,000 metres Lanarkshire Track Championships at East Kilbride and  U17  and U15 ladies Susie McLaughlin and Eva Ritchie set pbs in their 800m and 1,500m races while U20 Kai Newell equalled his 800m pb.

At the same time a Cambuslang quartet of Ritchie Carr, Iain Nicholl, Chris Upson and Peter Ogden competed in the Millport 10 miles event in which Ritchie was 6th overall, Chris the first M50 athlete and Iain the 3rd M40.  There was also a ladies marathon victory for Jennifer Campbell in the scenic Mull of Kintyre event.  Cambuslang runners were also prominent in a number of 5K Parkruns.  Kerry-Liam Wilson and Dave Thom recorded victories at Girvan and Rothesay, Kevan Harvey with a pb finished runner up at Strathclyde Park where Robert Gilroy also ran after a prolonged period of injury and John Kelly also clocked a pb.  M50s Mick Oâ€™Hagan and Dan Oâ€™Connell were 2nd and 3rd in their age category at Coatbridge and Tollcross.