The Scottish Cross Country Championships made a welcome return to Callendar Park Falkirk after a 2 year absence.  Fortunately weather and ground conditions were more kind than in 2020.  However, athletes still needed to be careful in certain areas such as when negotiating the water filled ditch after a rapid descent.  In a closely fought team battle for the senior title over 10 K Central AC prevailed once again to relegate Shettleston and Cambuslang to the silver and bronze medal positions.  Ryan Thomson in his first cross country race for 2 years led the home club counters home.  Out of a field of 624 finishers he was 8th, Mike Christoforou 17th, Craig Jardine 18th, Fraser Stewart 23rd, Cameron Smith 26th and former club captain Iain MacCorquodale 54th.   This was a gutsy team performance by our athletes with Fraser only having come out of isolation 2 days previously and Iain having to hang on over the latter stages having suffered a calf problem.  The next 2 athletes to finish in 60th and 67th place, Keiran Cooper and Andrew Carey, were representing their university.   M40 Gordon Robertson (78th) was comfortably inside the top 100.  There followed a quintet of red and white vests within the first 200 runners â€“ Stuart Gibson, Iain Hodge in his first national XC championship, Owen Walpole now resident in Scotland again, club captain Richie Carr and Iain McDonald who had used the Tollcross Parkrun as a morning warm up.  Chris Upson in finishing the leading M55 athlete led home a succession of Cambuslang members â€“ Justin Carter, Brian Douglas, Mick Oâ€™Hagan, 2nd placed M60 Colin Feechan, club secretary Dave Thom, David Scott, tent bearer Dan Oâ€™Connell, coach Iain Crawford and new member Chris Paton. 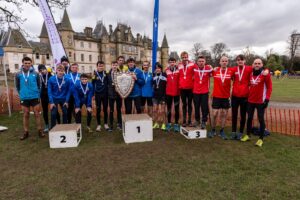 The senior ladies had the opportunity to race over the same demanding course and distance as the men.  Eve Mackinnon in finishing 21st from a field of 250 finishers confirmed once again that she is in good form.  Catriona Bain in her first season of running showed promise in narrowly missing out of a top 100 place while Lesley MCArdle, now working in London, enjoyed her workout after a lengthy period of injury.  Peggy Nan Rodger was the only representative in the U20 womenâ€™s event.  The U17 ladies achieved a 4th team spot thanks to Millie Nichollâ€™s inspiring 5th place with Eva Ritchie, Abbie McClue and Eilidh Kennedy in support.  The U15 girls team of Olivia McNicol, Lucy McGrandle and Martha Fleming took 9th place while Mollie May Scott and Grace Ferry gained useful experience in their first Scottish Cross Country Championship as did the U13 trio of Emma Ritchie, Erin Kearney and Megan Oâ€™Brien. 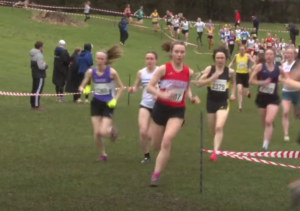 Chris McLew finished a very creditable 9th in the U20 men event leading Zak Povey, new recruit Luke Biggart and Michael Black to a close 6th team place.  The club had been unfortunate to lose Ruairidh MacGregor and Aaron Grew during the week due to injury and illness.  The U17 men team of Lewis Roddis, Finlay Robb, Jonathan Dow and Fearghus MacGregor packed closely together in 20th, 22nd, 32nd and 33rd places to take 4th team with Cameron Taylor the 5th finisher.  U15 Sam McCarthy (30th) with assistance from Chris Black, Lewis Cook and Gabriel Murphy brought the red and whites home in 9th spot with Cian Kearney and Jay Gallacher following up.  In the U13 race Euan Reid, the son of Iain and grandson of Owen, narrowly edged out Alistair McLachlan with Dylan Howat next. 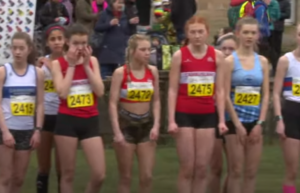 Once again Cambuslang Harriers would like to congratulate all competing athletes for their efforts in representing the club in the premier cross country event of the season and to thank our coaches, officials, parents, helpers and supporters.