All roads led to a sunny but cold Cumbernauld on Saturday where the Scottish Cross Country Relay Championships were fiercely contested across the age groups. There were awards up for grabs for male and female young athletes, men and women under 20/seniors and male and female masters over 40 and also over 50. Cambuslang Harriers acquitted themselves well with the Masters M40 and M50 winning gold medals in their respective age groups, the under 20/senior men finishing a laudable 4th and also supplying the second fastest B team, the ladies being 31st, the young females 20th and the young males 11th. All in all 57 Cambuslang Harriers, including Drew Pollock who made his debut for Glasgow University, participated in this prestigious event. 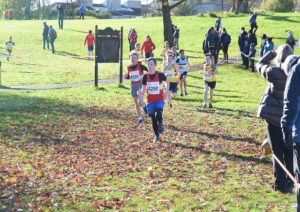 The first race off was the young females relay consisting of an under 13, under 15 and under 17 athlete. Abbie McClue, Niamh Riggins and Shona Carey combined well in 20th spot as did the B team of Eva Ritchie, Peggy-Nan Rodgers and Susie McLaughlin to achieve 31st position out of 82 finshing teams. Mya Carmichael and Eilidh Kennedy were in an incomplete team. The young male A and B teams finished a respectable 11th and 15th out of a field of 104 teams. Sam McCarthy of the A team handed over to Robbie Woods and Chris McLew with the latter two recording the 10th and 5th fastest times of the day in their age groups. Brodie McDonald also set up Lewis Roddis and Ruairidh MacGregor to advance the B teamâ€™s position. Likewise Hamish Garner gave Ferghus MacGregor and Brodie Aitken the opportunity to advance through the field. The harriers also completed two more teams thanks to Reece Duncan, Alex Barnett and Jack MacKinnon and to Matthew McColl, Ben McDougall and Aaron Grew. Both Chris Black and Dylan Stefani also ran the opening under 13 leg. All our young male and female athletes particularly the inexperienced 13 year olds deserve credit for competing on such a testing and undulating course. They will benefit from the experience. 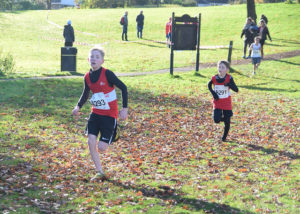 Under 20 Amy Craig in her first year of the sport led off for the ladies with Scottish, UK and European duathlete/triathlete medallist Kirsty Oâ€™Brien, Jennifer Reid and club coach Lynn Angley following on. The ladies stuck well to their task crossing the line in 31st place. Honours in that race went to Edinburgh University, VP- Glasgow, with whom we share the same kit sponsor achilles heel, and Kilbarchan. 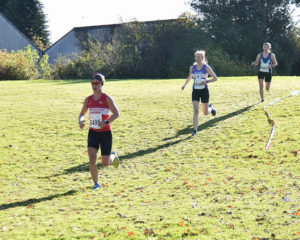 The final race of the day featured the men and as previously in the West Relays the A and B teams went head to head on the first of the 4 legs. Keven Harvey of the A squad was a stride ahead of Fraser Stewart for a good part of the 4K circuit but in the closing stages Fraser edged ahead to come home in 8th spot with Kevan one place and 2 seconds behind. Interestingly Cambuslangâ€™s first year under 20 Drew Pollock in the colours of Glasgow Universityâ€™s B team came through strongly to clinch 11th position. Lap 2 saw A team runner Ryan Thomson move smoothly through the field to take the club into the silver medal position while B team runner Craig Jardine kept Cambuslang at the top end of the field in 12th place. U20 Jamie MacGregor running mainly in a vacuum ran well to keep the club in medal contention in 3rd spot as former club captain Iain MacCorquodale in 13th position ensured the B team was ahead of most of the A teams. Fellow U20 Gavin Smith in spite of running a valiant race to hold a podium finish had to give way to U20 GB internationalist Sol Sweeney of Glasgow University who recorded the fastest time of the day. In the end the young Cambuslang A team had to settle for a worthy 4th place behind Central Ac, Kilbarchan and Glasgow University. Al Campbell moved the club up to 11th and sealed the 2nd B team spot in the race thus indicating the strength in depth of the club. Unfortunately the C team of U20 Anfrew Carey, Ritchie Carr and Gordon Robertson lacked a 4th leg runner on the day while they were lying in 30th position out of 122 teams. The D quartet of James Smith, Dan Oâ€™Connell, Mick Oâ€™Hagan and Eddie Carr were 81st. 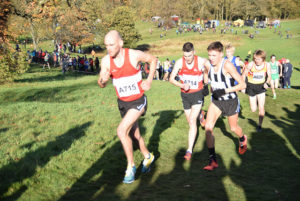 The masters men competition for over 40s and 50s was incorporated into the menâ€™s relay with 3 to count for the older masters and 4 for their younger counterparts. A fierce battle took place for the medals in both age groups with Cambuslang coming to the fore in the closing stages in both races. Chris Upson and Stan MacKenzie kept the M50s in close contention in 4th position before hill running specialist Colin Donnelly recorded the fastest time in the age group to seal an 11 seconds victory from a strong Cumbernauld trio with Shettleston taking the bronze medals. In the M40 category Justin Carter and Kenny Campbell making his comeback after a lengthy injury took the club into silver medal position before Jamie Reid overtook last yearâ€™s champions Corstorphine in the latter stages of leg 3. Ben Hukins extended the lead to 28 seconds over Corstorphine with Shettleston gaining the bronze medals. The B team of Alick Walkinshaw, Iain Nicholl, Dave Thom and Gordon McDonald finished a worthy 11th in addition to being the first masters B team. 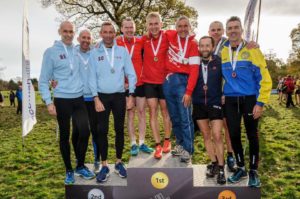 Both M50 and M40 teams have an impressive race history in this event. In the 7 year history of the older age group Cambuslang has won gold on 5 occasions and silver once. The M50s missed out last year having concentrated on the UK Masters Cross Country Relays held on the same day at Long Eaton in England where they secured the silver medals. The M40 event has a longer history having been in existence for 23 years. During that time Cambuslang has won 14 gold medals, 3 silver and 2 bronze. 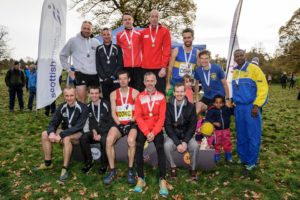 While the runners get the publicity and attention the invaluable background support from our club coaches, officials, parents and volunteers is greatly appreciated. Likewise, Scottish Athletics, North Lanarkshire Council and the local clubs deserve our thanks too.

Photos Â©Colin Stephen except where indicated 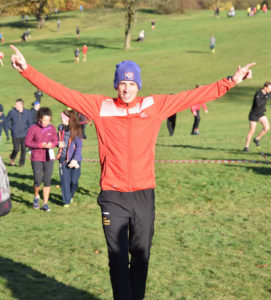