Cambuslang Harriers turned out in force at the annual Scottish Veteran Harriers LSK Road Relays around Strathclyde Park.  Cambuslang fielded 3 over 35 male teams, 2 over 50 male teams, 1 complete ladies team with an incomplete team of 2 ladies.  Both males and female races were held in conjunction around the 6K Loch circuit with 4 runners comprising a male team and 3 runners for the ladies.  While the weather stayed dry the increasingly strong winds had a considerable wind chilling effect both on the temperature and on times. 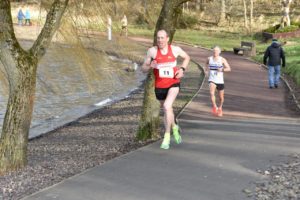 The M35 A team of Kenny Campbell, Gordon Robertson, Jamie Reid and Ben Hukins led the race from start to finish ahead of Edinburgh AC and Dundee Hawkhills Harriers.  It was not surprising that the club had a winning margin of over 2 minutes since Kenny and Ben recorded the 2 fastest times of the day with Gordon being the 4th fastest.  The M50 A team also gained a podium place finishing 2nd in their age category, sandwiched between Cumbernauld AC and PH Racing Club, thanks to Dave Thom, Charlie Thomson, Mick Oâ€™Hagan and Chris Upson.  Charlieâ€™s 3rd fastest individual time was further evidence of another step in his comeback after a long injury spell.  Cambuslangâ€™s M35 B team comprising of the non related McDonalds, Iain and Gordon, Iain Nicholl and Frank McGowan finished a very creditable 8th and were the first B team over the line.  Colin Feechan, Dan Oâ€™Connell, Sandy Eaglesham and Alick Walkinshaw combined well to gain 5th spot for the over 50 B squad. The final male team of Tony McCutcheon, Kenny Finlayson, John Kelly and David Stirling were 42nd in the team standings. 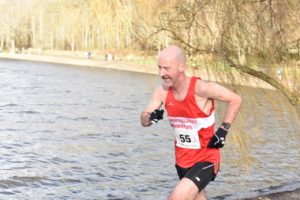 Carole Setchell, Jennifer Reid and Kirsty Oâ€™Brien worked hard in the windy conditions to take a laudable 7th place with both Jennifer and Kirsty sharing the same individual time and the joint 14th fastest overall of the day.  There were also encouraging runs from Bernie Oâ€™ Neil who finished a gutsy 6th on the opening leg and also from Julie Dell on leg 2.

Members of Cambuslang Harriers also fared well in various parkruns the day before.  There were victories for Kerry-Liam Wilson at Girvan, Doug Roberts at Strathclyde Park, Ritchie Carr at Falkirk and Alasdair Campbell at Linwood while Iain McDonald took 3rd place at Tollcross.  Alasdair had a busy weekend having also won the 3K on the Green on the Friday.