14 members of Cambuslang Harriers made the long but rewarding journey to compete in the Masters Cross Country Championships at Hawick as they returned with the over 40 and 50 men team titles along with 7 individual medals.  The local club Teviotdale Harriers had set out a testing trail over rock hard undulating farmland and open country.  The runners were blessed with bright sun shine albeit cold unlike the last occasion when arctic conditions prevailed. 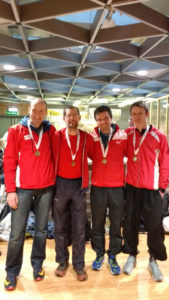 In the opening 6K race for the lady masters and men over 65 Cambuslang were represented by Jennifer Reid and Frank Hurley.  Jennifer ran a determined race throughout and finished a creditable11th in her age category.  Frank who is still on  the recovery road from illness nevertheless managed to take the M65 silver medal behind his local rival Andy McLinden of Hamilton Harriers. 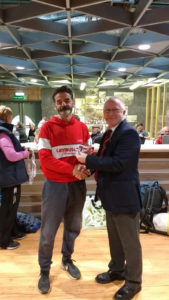 Next up were the male runners between the ages of 40 and 64 with 4 runners to count for the coveted over 40 team prizes and 3 for the over 50 team awards.  Cambuslang who had narrowly lost their M40 title the previous year to Corstorphine were keen to regain the title.  Pre race it looked to be a 3 race battle between these 2 clubs and a strengthened Shettleston masterâ€™s team.  However, the Cambuslang quartet of Ben Hukins, Iain Reid, Kenny Campbell and Justin Carter packed well in 4th, 5th, 9th and 12th position to ensure a comfortable victory over Shettleston and Corstorphine.  Both Ben and Justin were further rewarded with individual bronze medals in the over 40 and over 45 men categories.  Offering good back up in this age group were 5th placed M45 Jamie Reid and Iain Nicholl. 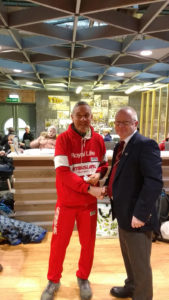 Cambuslang were the defending champions in the over 50 event but looked to be facing a strong challenge from Cumbernauld AC.  However, led by 59 year old hill runner Colin Donnelly who is at home in this type of terrain and with able support from Charlie Thomson and Stan McKenzie the Lanarkshire men prevailed over Cumbernauld by a margin of 17 points with Corstorphine third.  Both Colin and Charlie lifted the M55 and M50 individual gold medals while Stan took the M55 silver with club mate Chris Upson taking the M 55 bronze award.  Mick Oâ€™Hagan and unlucky Des Dickson who had a spike problem mid race provided the vital back up support required in team events.  Not surprisingly Charlie was delighted to have won his first individual Scottish gold medal in 40 years of running.  He can add this coveted award to his long list of Scottish team gold medals and to his Scottish 10 mile individual silver and to his UK individual silver and bronze medals at 5K and 10K.  This achievement is all the more remarkable as in recent years he has been inactive running wise due to a series of injuries and to a bad fall which threatened to end his running career. 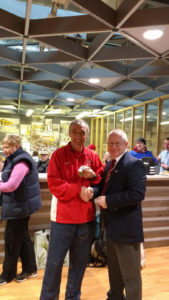 Teviotdale Harriers and Alex Jackson and his team from Scottish Athletics are to be congratulated for staging a well run championship over a traditional country course.

Nearer to home 4 Cambuslang Harriers took part in the Inverclyde 5 mile road race.  Times were generally slower this year over this potentially fast course on account of the adverse wind conditions.  Stuart Gibson was the first Cambuslang runner home in third place in a time of 25.18 6 seconds ahead of under 20 clubmate Gavin Smith.  Al Campbell was a good 7th recording 26.30 with M45 Scott Hunter stopping the watch at 32.02.

This was a good workout for Stuart and Gavin before they head off next week to compete in the prestigious Armagh 5K International Road Race.  They will be joined by fellow Cambuslang athletes Ryan Thomson, Fraser Stewart, Kevan Harvey, Jamie MacKinnon, Colin Reilly and Richard Carr.

Christopher McLew escaped the cold and wind when competing in the Scottish under 20 Indoors 1500 M Championship at the Emirates Stadium.  Having won his heat on the Saturday he was again first over the line in the final the following day to take the Scottish title.

Eddie Stewartâ€™s daughter Moira continued her run of good form when she won the Cross Della Vallagarina Rovereto event in Italy ahead of Italian and Hungarian runners.  On the strength of this victory and on her 29th place in the recent senior ladies European Cross Country Championships she has been selected to run for the Czech Republic in the forthcoming World Cross Country Championships.