The grounds of the historic Scone Palace, where the Scottish Kings including Robert the Bruce were crowned, was the new venue for the Scottish Cross Country Relays.  With the event having been cancelled last year due to Covid restrictions there was, not surprisingly, a large gathering of contestants across the age groups.  Cambuslang Harriers were well represented and came away with silver and bronze medals in the M40 and M50 categories as well as finishing 2 senior menâ€™s teams in the top 8 positions.  The format and order of events was the same as in the previous West Relays and thus the under 13, 15 and 17 girls kicked off the proceedings. 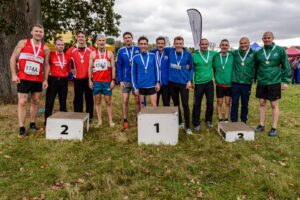 The clubâ€™s A trio of Erin Kearney, Olivia McNicol and Millie Nicholl put in a competitive performance to finish in the top half of a quality field.  They were backed up by the B and C teams consisting of Emma Ritchie, Mollie Mae Scott, Eva Ritchie, Megan Oâ€™Brien, Lucy McGrandle and Eilidh Kennedy.  Their young male counterparts completed 4 full teams.  The A team of Jamie McCarthy, Sam McCarthy and Lewis Roddis combined well for a worthy 15th place while Alistair McLachlan, Chris Black and Jonathan Dow finished comfortably inside the top half of finishing teams.  The C team of Euan Reid, Lewis Cook and Fearghus MacGregor was not too far behind the B squad and a novice D trio of Dylan Howat, Cian Kearney and Dean Edmunds will have benefitted from running at this level in a national championship. 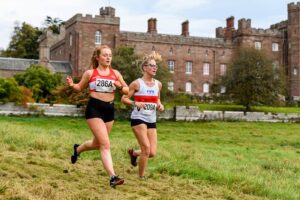 The spotlight was next on the under 20, senior and masters women.  Jacqueline Etherington on her first competitive outing of the cross country season put the harriers into a good position which was maintained by Lesley Blackwood, Kirsty Oâ€™Brien and Jacqui McLew.  Unfortunately due to an unavoidable late call off Peggy Nan Rodger, Rachel Wardrope and Sarah Simpson had no one to complete the final leg. 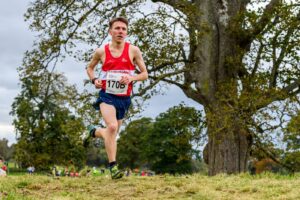 The under 20 men, seniors and masters had also to contend with the problem of non-entrants due to a variety of injuries and also call offs on account of illnesses which necessitated changes to teams and to running order.  However, the club still managed to finish 8 competitive teams.   On paper the A and B teams looked to be closely matched and this proved to be the case as the 4 legs unfolded.  At the halfway stage Cameron Smith and Fraser Stewart of the B team were in 2nd spot 2 places ahead of the A team of Chris McLew and Mike Christoforou.   However, Kev Harvey on the penultimate leg edged the A team ahead of Iain MacCorquodale from the B team only for Jamie MacKinnon to overtake Craig Jardine by the finish which meant that the B team took 6th place overall and the A quartet 8th position.   The strength of depth in the club can be evidenced from the following statistics â€“ from 535 competitors Cameron was 9th quickest, Mike 18th, Kev 22nd, Jamie 27th, Fraser 32nd, and Chris 34th/9th under 20.  The C team contained a mixture of youth and experience in the persons of under 20 athletes Zak Povey and Michael Black alongside M35 runners Colin Reilly and club captain Ritchie Carr.  This blend worked well in achieving 25th spot.  The M40 West District Champions quartet of George Pettit, Stevie Wylie, Justin Carter and Gordon Robertson with the 2nd fastest time of the day finished hot on their heels in 28th place to secure national silver medals in their age category only 5 seconds adrift of the victorious Edinburgh AC team.   This was a valiant effort by the M40 squad considering that the clubâ€™s winning quartet of Kerry-Liam Wilson, Iain Reid, Ben Hukins and Kenny Campbell in the pre Covid Masters Scottish Cross Country Championships of 2020 were missing due to injury.  The masters B team achieved 14th position in their age group thanks to Iain Nicholl, Scott Hunter, Kenny Finlayson and coach Iain Crawford while the D team of Theo Carter, Gary Lyon, coach Simon Gold and Stephen Leonard finished one place behind them.  3 other club members, Kieran Cooper, Andrew Carey and Keir Crawford, also ran well when representing their universities. 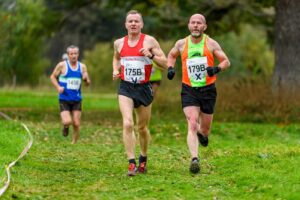 There was also a M50 competition over 3 legs within the main race and Cambuslang occupied 3rd and 6th spots.  Richard Cooper with the 2nd fastest time overall, Mick Oâ€™Hagan and Chris Upson battled well to take the bronze medals while club secretary Dave Thom, club president Des Dickson and Frank McGowan had the satisfaction of providing the first M50 B team. 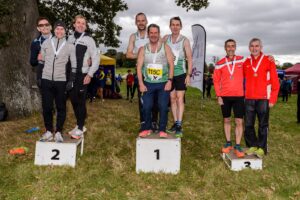 The club is appreciative as always of the unstinting support given to athletes by coaches, club officials, supporters and parents.