A Welcome Return to Competition

With the relaxation of Scottish Government Covid restrictions across Scotland except for those living in the Glasgow and Moray areas the Stirling Monument Mile Classic Event took place on Friday 21st May.   19 Cambuslang athletes across the different age groups participated in this popular event.  The Central AC organisers put on 27 graded races to accommodate the large number of entrants with athletes being placed in appropriate races according to their pb or estimated mile times.  Our members who were either attempting to post a personal best time or to record their first time at this classic distance were pleased to be experiencing a real race occasion again. 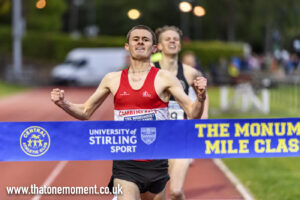 Gavin Smith continued his fine vein of recent form by winning his race in a pb of 4.11.22 which was 8 seconds quicker than his performance from last year.  U20 Chris McLew recorded 4.27.56 in the same heat as Gavin.  While his time was outside his pb it was a good workout for him as his attention in the last few weeks has been primarily focused on his university exams.  Fellow U20 Andrew Carey reaping the benefits of his consistent training during lockdown sliced 3 seconds off his pb to lower it to 4.28.43.  Similarly first year under 20 Aaron Grewâ€™s time of 4.31.42 was a 1 Â½ seconds improvement.  Club captain Richie Carr (4.37.77) improved by 7 Â½ seconds.   Stuart Gibson and Laurence Heyes with respective times of 4.40.94 and 4.41.70 were short of their pbs but nonetheless will have benefited from their sharp workout in an actual racing experience.  U20 Ryan Donnelly unfortunately missed breaking the 5 minutes barrier by 2 seconds.  Newcomer Ian Hodge can be pleased with his first track race with a debut clocking of 5.02.2. 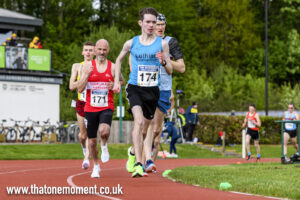 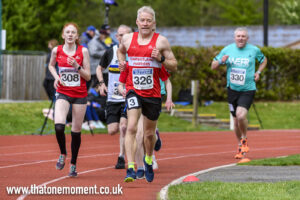 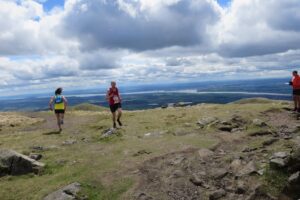 In sharp contrast to the flat mile track event Cambuslang members Iain MacCorquodale and Kieran Cooper in the colours of St Andrews University took part the following day in the Maddy Moss Hill Run at Tillicoultry.   The testing 6.1mile race involves a very steep ascent of 648 metres up Ben Cleuch with an equally near vertical plummet to the finish.  In a competitive race Kieran showed good form to take 7th spot in a time of 52.52 with Iain (56.17) who has been gradually building up his fitness again after injury in 15th place.