Cambuslang Harriers were represented at the Scottish Athletics Awards Evening by lead coach Mike Johnston, club captain Iain Reid and athlete Justin Carter.  When it was announced that Cambuslang had won the Off-Track Club of the Year Award all 3 were delighted to accept the prestigious Award on behalf of the club.  The decision by the Scottish Athletics Panel to select Cambuslang from a shortlist of 4 nominated clubs was based upon the club’s close work with the local community including schools and the support given to their athletes from novices through to national standard along with the multi team medal successes of the club at Scottish and UK level across the different age groups.  All members should be proud of the club’s award which recognises the hard work put in by its athletes, coaches, officials, parents and supporters. 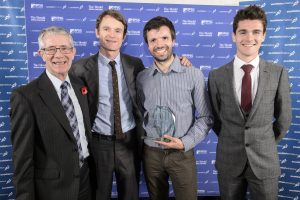 Cambuslang’s Master athlete Paul Thompson had also been nominated for the Master Athlete of the Year Award having won the World Masters Half Marathon M60 Gold and two silver medals in the Cross Country and 3K Track Events held in Daegu, South Korea.  Although Paul did not win his category he felt greatly honoured to have been nominated.

Each year the Tom Stillie Award is made on the night to award an individual who is seen to have contributed most to Scottish Athletics in the past year and this year Cambuslang’s Mike Johnston was the deserved and popular recipient.  Mike has been involved in coaching at the club since the late 1980s and was the Scottish Endurance Coach from 2004 to 2014 and was involved in 3 Commonwealth Games.  During that time and since he has coached and mentored athletes to national and international level.  The unassuming Mike was visibly taken aback when the announcement was made and found it initially difficult to take in.  Naturally he is delighted to have had this honour bestowed upon him in recognition of his continued valuable contribution to Scottish Athletics and its athletes. 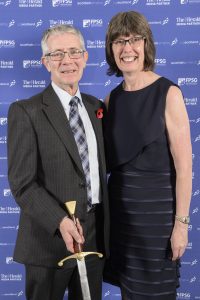