Bernie O'Neil, Jennifer Reid and Erica Christie followed up their previous week's bronze medal success at the Masters Scottish Road Relay Championships by winning team gold at the Scottish 10 Miles Road Championship held in conjunction with the Tom Scott Memorial Race.  This was a remarkable performance by the trio not only because it was a first for the club but also because they were in competition with younger athletes as both senior and masters over 35 were eligible to compete as team members.  Bernie, Jennifer and Erica packed well to finish in 13th, 16th and 19th positions to secure the national title ahead of Bellahouston Road Runners and Garscube Harriers.  Although the race also incorporated the West District Championships there were strangely no team medals awarded.  Erica also won the Scottish W60 gold medal and set the fastest time recorded so far this year in the UK for her age group.  Paula McCabe in her 10 mile debut finished strongly. 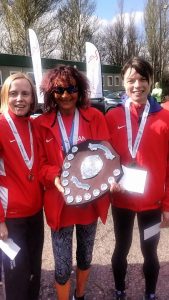 The men could not quite match the ladies golden performance but nonetheless can be pleased with lifting the silver team medals sandwiched between Inverclyde AC and Edinburgh.  Robert Gilroy, Kerry-Liam Wilson and Colin Reilly just missed the team gold by 3 points.  However, Robert and Kerry- Liam had the consolation of securing the masters over 40 gold and silver medals while Colin in smashing his PB by over 6 minutes won his first ever Scottish team medal in his first year of serious running.  In a sprint finish Brian Douglas just held off Stan Mackenzie who took the M50 Scottish title.  Next in succession came Chris Upson, Alick Walkinshaw, Simon Gold, Paul Kernohan, David Stirling with a PB, Sandy Eaglesham and John McCluskey also recording a PB.
David Cooney