I am sad to report that Willie Marshall passed away on Friday 30th September.  Our thoughts at this time go out to his family – his son David and daughter Carol and their respective spouses Fiona and Brian, grandchildren Lauren and Grant and great grandson Noah.  Willie was very much a family man.  His family including his wife Mary until her death in 2007 fully supported his running career.  When not racing he enjoyed going to the football with David to support their beloved Motherwell FC.
Willie had a long and prolific running career particularly from the age of 50 onwards at Scottish, UK, European and World level.  He won at least 10 Scottish Veteran track titles, 11 Scottish Veteran Cross Country titles along with 1 silver and 1 bronze, 14 UK Veteran track titles and 4 road titles, 4 European Veteran and 4 World Veteran titles while breaking 4 Veteran World records in addition to Scottish and UK Veteran records.  What an incredible and often unheralded list of achievements for such a quiet and unassuming man!  No one who saw him shuffling at a slow pace around the streets of Hamilton would have imagined the running stature of this elderly frail looking gentleman.  Willie may have looked frail but in running terms he was strong and determined and was a totally different athlete racing than when training.  He was a difficult man to drop and once he was in top gear he did not falter.  His maxim was to train slowly but to race regularly which clearly worked for him.
Willie represented Motherwell YMCA, Clyde Valley and Cambuslang Harriers from 1994 onwards.  His son David also took up running with Clyde Valley and later Cambuslang.  David posted the very respectable times of 8.42, 15.06 and 31.40 for 3/5/10K before his running career was cut short by injury.  Willie and David made Scottish Athletics history when they became the first father and son to compete in the same team in the prestigious Edinburgh to Glasgow road relay in the 1982 event.  Willie’s grandson Grant Sheldon, has recently shown that he has inherited his grandfather’s genes by winning this year’s World Students Triathlon Championship and gaining a European Under 23 Triathlon bronze medal.  Grant also competed for Scotland in the 2014 Commonwealth Triathlon Event and won the 2011 Scottish Cross Country Under17 Cross Country Championship when competing for Cambuslang Harriers.
I first became aware of Willie when competing in the 1973 Clydebank to Helensburgh 16 mile road race.  This was my first attempt at the distance and I was surprised to be overtaken at the halfway stage by an apparently frail older runner wearing black plimsolls.  However, there was nothing I could do but let him disappear into the distance.  When he moved house in 1980 to near where I stayed we started training together on a Sunday and were accompanied by David, Tom Ulliott, Kevin Newberry and Donald Burt.  This continued for over a decade.  I also sometimes took Willie to races as he did not drive.  We were competing in the 1981 Sanquhar 11 mile road race which weaved its way from the splendid starting point of Drumlanrig Castle along quiet country roads into Sanquhar playing fields.  We ran the race together and the tranquil atmosphere of the day was abruptly shattered on entering the track for the run in.  We suddenly heard loud animated voices urging both of us on. Naturally Jim Brown and Peter Fox of Clyde Valley who had finished 1st and 4th were shouting Willie on as he was their 3rd and final counter for the team race.  I was the only competitor for Cambuslang that day but I found myself being roared on by the Springburn trio of Graham Crawford, Doug Gunstone and Alastair MacFarlane who had finished in 5th, 6th and 7th place.  Springburn were sitting on 18 points and would clinch the team title by 1 point if I finished ahead of Willie.  I duly beat Willie by 3 seconds much to the delight of the Springburn team who jokingly offered me an honorary membership of their club.  Willie was content to win the first veteran prize.  Coincidentally Graham was reminding me of this incident earlier this year when we met at a cross country event.
During all the time I knew Willie he never had a bad word to say about anyone and he was extremely modest about his superb achievements.  Although he retired from competition in the early 2000s due to eye and leg problems he continued light running.  In recent years he was not able to train but he was still out walking and could at times be seen be seen breaking into his shuffling running style to catch a bus.  He took great pride in seeing Grant compete for Scotland at the Commonwealth Games and on his recent European and World Triathlon successes.  Only a month ago he was delighted to receive a copy of the Scottish Veteran Harriers Magazine in which Colin Youngson, in collaboration with Willie’s son David, had written an excellent article on his remarkable running career.  Colin’s article serves as a most fitting and well deserved tribute to a Scottish running stalwart and with the permission of the Scottish Veteran Harriers I am pleased to include Colin’s article here.
——————————— 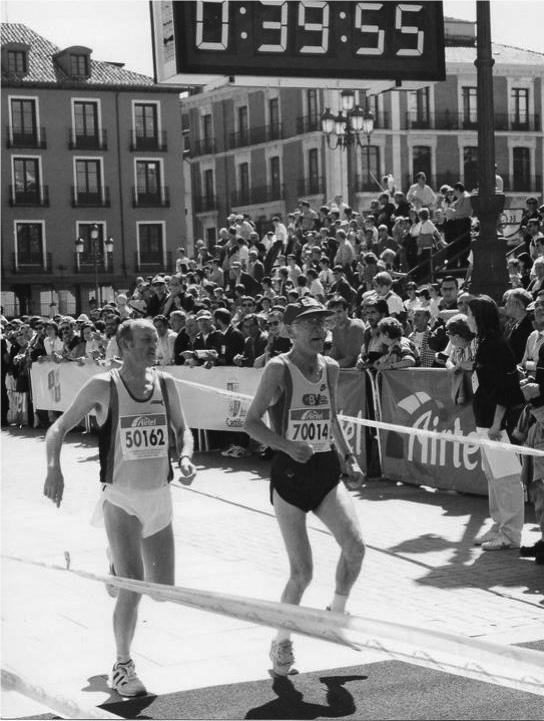 (As anyone who has competed from M50 to M70 will be only too aware, Willie Marshall’s list of titles and very fast times will be almost impossible to match. What an inspiration and formidable challenge for future Masters athletes in those age-groups! His development is interesting: from a club member who trained lightly; to a good club runner who avoided too much mileage but raced frequently for speed-work; to a brilliant veteran, who continued to train steadily and also to race at all distances from 800m to 25km. ‘Train, Don’t Strain’ was the philosophy behind Long Slow Distance. Not a bad notion for anyone wishing to run well after 50?)
Bert McKay, who was a very important influence on the success of Motherwell YMCA, said: “Willie seemed to be a very light trainer but took part regularly in fast pack runs at the club on Tuesdays and Thursdays. He was a nice man, quiet and apparently frail but obviously much tougher than he looked. I remember one particular 5 mile road run I had with Willie just a week before one E to G. I was in good form but could not drop Willie at any time during the run! He was a lot better than he showed when he was younger.”
Peter Duffy (who was a good hill-runner and also won a medal in the Scottish Marathon) said: “I was a team-mate of Willie’s at Motherwell YMCA. On the road he was too fast for me and had a beautifully smooth, flowing style. When I was a club member, he only trained on his own and did not run at all on Sundays, due to strong Christian beliefs. He was respected for this and his fine running in the E to G.”
George Black (who has recently broken the British M75 20 miles record) wrote:
“I remember Willie Marshall well. When I started running he was my target.
Remember first time I beat him was a 2 mile at Glasgow Green I was pleased although he was 11 years older than me!
One small anecdote. I was competing in a Yorkshire Vets 5K track championship when that fine runner, Gerry Spinks of Bingley, approached a group of us and asked for our assistance in his attempt to better the British Record for the event.
I asked who held the record and he replied, “some Scots guy.”
I correctly suspected it was Willie Marshall so my response was less than cordial.
He failed in his attempt. I think it likely that Willie still holds the British Road 10k record for M70 (which he set at Grangemouth).
I don’t suppose he will remember me but convey my regards.”

David Fairweather wrote:
“I knew Willie quite well. He was always quiet and unassuming, and seemed to train very slowly, but still produced the speed when it was needed in races.
I remember asking him if he would run at the 1993 Masters Cross Country International in Cardiff. He said he wasn’t a XC runner, and didn’t think he was good enough! However I persuaded him to run and (at the age of 65) he finished 6th M60, a few seconds behind Hugh Gibson and two places in front of Pat Keenan, helping the team to win silver medals.”