The Scottish 10K Road Championship event has proved in recent years to be a successful one for Cambuslang Harriers and this year was no exception.  The Cambuslang trio of individual silver medallist Grant Sheldon, Stuart Gibson and Kevan Harvey who set a pb successfully defended their team title from host club Central AC and Edinburgh AC.   The Cambuslang men have in the last 11 years won 3 team gold medals, 4 silver and 3 bronze. Iain Reid also won the M40 gold medal following the golden success of Robert Gilroy in the previous 2 years and of Kerry-Liam Wilsonâ€™s similar achievement in the 5 years prior to that.  Grant as part of his triathlon training had a 40 mile post race cycle training session ahead of him while Iain as part of his marathon build up did a steady 8 mile run shortly after completing the 10K.  The harriers had another 13 finishers in the event crossing the line in the order of Colin Reilly in a pb time, Gavin Smith, Alistair Campbell, Stevie Wylie, Ritchie Carr, Stan Mackenzie, John Paul Murphy, David Savage, Michael Black, Brian Hughes, Iain Nicholl, Dan Oâ€™Connell and Sandy Eaglesham.  Brian Hughes won the M60 prize in the open race but unfortunately there was no championship medal awarded in his age group.  On the same day Moira Stewart clocked an impressive 34.43 for the Prague Grand Prix 10 K road event which would have given her a bronze medal in the Scottish Ladies event. 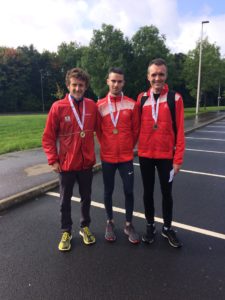 In the accompanying race for young athletes U15 year olds Millie Nicholl and Lewis Roddis performed strongly to finish runners up.