SOME NEAR NORMAL RACING RETURNS ON ROAD, TRACK AND HILLS

Over the last 2 months there have been some opportunities for Cambuslang athletes to participate in several races which had the necessary and crucial health safety precautions in place.

Grant Sheldon, Fraser Stewart and new member Jamie Traynor racing in England and Moira Stewart in Bratislava and Prague took their opportunity to post fast times.  Grant ran a superb 13.51 for a 5K podium road race for elite athletes which ranks him first in Scotland for this distance in 2020.  Fraser and Jamie ran well in the Barrowfield Podium 10K to record 31.49 and 33.09 respectively which was a 25 seconds improvement for Jamie.

Moira competing as a guest in the Bratislava half marathon recorded an impressive winning debut time of 72.48 to put her 4th in this yearâ€™s Scottish rankings.  She followed this up by lifting the senior ladies Czech 10K road title in a pb of 33.49 and her younger brother Gerron also clocked a pb in the menâ€™s race with a creditable 33.29 stint. 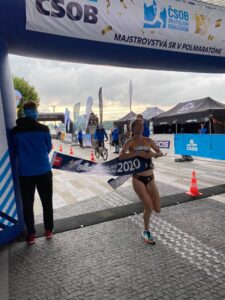 Closer to home the club organised a 5K road event for members over 4 and a half laps of a quiet circuit around Shawfield.  With the necessary precautions put in place by Dave Thom and Mike Johnston and with assistance on the day from Simon Gold, Barnie Gough and Stephen Leonard the 18 athletes set off at intervals in 3 different groups.   First athlete home was Gordon Robertson, one of Scotlandâ€™s leading M40 runners, in the fast time of 15.52 in the wet conditions.  Under 20 Andrew Carey finished 2nd with a time of 16.44 with promising newcomer Ian Hodge (16.59) winning the M35 battle ahead of Ritchie Carr (17.05) and Iain McDonald (17.17).  M50 Mark Kingâ€™s excellent time of 17.45 allowed him to beat M40 Gordon McDonald by 2 seconds with M45 Kenny Finlayson recording 18.48.  The tussle for the first M60 went to club secretary Dave Thom (19.00) who prevailed by 22 seconds over club president Des Dickson with M65 Scottish XC champion Frank Hurley only 28 seconds adrift.  M50 club stalwart Dan Oâ€™Connell (20.23) was running in a vacuum ahead of closely matched newcomers Kris Hellis (21.07) and Simon Lund (21.13) with M45 Scott Hunter not far behind in 21.28 ahead of another newcomer Chris Campbell (21.58).   Paula McCabe, the sole lady representative, put in a good shift to record 22.24 as did M55 James McLaughlin (22.50). 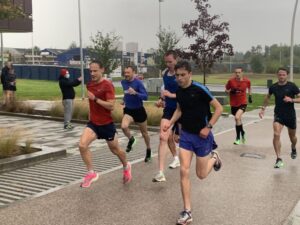 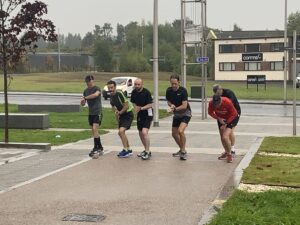 The hills at Comrie came alive with the sound of runners taking part in the uphill only race in the Scottish Hill Running Championship event.  Their reward for scrambling to the top was that they could have a more leisurely and relaxed descent back to where they started out.  Not surprisingly with the hill fraternity having been starved of races the entry list read as a whoâ€™s who of Scottish hill running athletes.  The 6 Cambuslang participants acquitted themselves well.  Alasdair Campbell came home in an impressive 12th place in the star-studded field.  U23 Kieran Cooper representing St Andrew University finished a very worthy 19th and just missed out on a bronze medal in his age group.  Former club captain Iain MacCorquodale continued his comeback from a lengthy injury to take 27th spot while Justin Carterâ€™s 39th place saw him take the M40 silver medal.  Kieranâ€™s dad Richard who is soon to move into the M50 age group took the 5th M40 place and M55 Chris Upson was 6th in the M50 category.