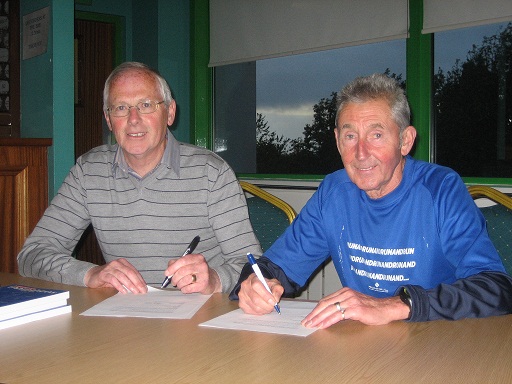 Ronhill Cambuslang Harriers hosted a well attended running seminar on Friday evening at the Cambuslang Rugby and Sports Club.Â  The main speaker was Ron Hill, a former triple Olympian, world record holder on road and track and European and Commonwealth Games Marathon Gold Medallist.Â  Ron who is just a few weeks short of his 74th birthday has not missed a single dayâ€™s training since December 1964 which is an amazing record.Â  The former Olympian was there to pass on the benefits of his experience to a captive audience and to sign a new clothing contract between the harriers and Ronhill Sports/ OSC.

Ron was ably supported by two of Scotlandâ€™s top distance runners – Bobby Quinn and Claire Gibson.Â  Bobby has won multi Scottish titles on road, track, country and hills while representing Great Britain in all of these disciplines and in spite of now being a veteran over 45 he is still a force to be reckoned with in Scottish athletics and on the UK veteran scene.Â  Claire is a Scottish champion, Commonwealth Games representative and UK internationalist over 800 metres.Â Â  The seminar which was organised by Own Reid and chaired by Mike Johnston, the national endurance coach finished with a lively and entertaining question and answer session.

The action switched the following day to the Strathclyde Parkrun over a distance of 5K around the loch side.Â  Ron was fitting in his daily run before heading back to Manchester and was joined by around 30 Cambuslang Harriers.Â  Ron finished in a very creditable time of just over 25 minutes and was pleased with his performance.Â  At the end of the run he posed for photos with our runners and signed autographs too.Â  It was fitting that the first male and female runners home were club members Charlie Thomson and Katie Bristow.Â  The local harriers were also successful in the different age awards with David Robertson first male under 17, Drew Pollock and Niamh Brown first male and female runners under 14, Dave Thom first male over 50 and David Fairweather first over 65.

The local harriers continued on their winning way on the Sunday at the Scottish Road 10K Championships held at Stirling.Â  New member Wegene Tafese won the individual title and Kerry Wilson the over 35 award and with Stuart Gibson in 6th position the club secured silver team medals.Â  Alex Lamond did the female section proud by finishing 2nd under 20.

The cross country and road season is fast approaching and the harriers are keen to recruit new members from the age of 12 upwards.Â  Training is held at the Cambuslang Rugby and Sports club on Langlea Road at 7.00 pm prompt.Â  Further information and contact details can be found on the Ronhill Cambuslangâ€™s Harriers website.