A number of Cambuslang Harriers have recently been involved in races on the road, track and country. 5 members saw out 2021 by participating in the Tilli 10K on the 27th December. Ryan Thomson ended his year on a high when he pulled away in the closing stages from Scotlandâ€™s Commonwealth Games bronze medallist Robbie Simpson to breast the tape in a personal best time of 29.45. Only 3 other athletes including club mate Grant Sheldon have run faster on this course. Stevie Wylie enjoying his move into the M50 category underlined his dominance when lifting his age category prize in the fast time of 33.57. There were good performances too by club captain Richie Carr (34.18), Ian Hodge (35.20) and club coach Iain Crawford (45.03). A few weeks later Andrew Carey running in the colours of Glasgow University set a pb of 32.30 when finishing in 2nd place in the historic Nigel Barge Race while Chris Upson was 3rd over 50 with Mark King 4th in the same age group. 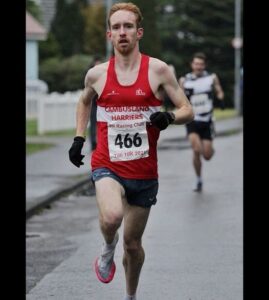 Ryan Thomson made his 2022 debut setting an impressive 3000M pb of 8.14.25 at the Sheffield indoor meeting and followed that up 2 weeks later with an 8.16.56 clocking at the same venue. Meanwhile over in the USA Gavin Smith performed very well for his university in an indoor meeting at Boston. He ran a fast 1200M of 3.00.03 in the opening leg of a medley relay and then the following day recorded a pb of 4.06.87 for the classic one mile event. Both runs augur well for Gavinâ€™s 2022 campaign in the States. The masters pulled the curtain down on competitions in January at the Scottish Masters 3000M Championships. There were gold medals for M50 Stevie Wylie and M55 Chris Upson, silver for M65 Sandy Eaglesham and bronze for M35 Richie Carr, M50 Mark Gallacher, M60 Dave Thom and M75 Peter Ogden. Stuart Gibson on his comeback after injury and illness finished 6th in a competitive M35 field with indoor track debutant Ian Hodge close on his heels in 7th spot while Mark King was 5th in the M50 category. Unfortunately Jacqueline Etherington was unable to defend her W40 title due to a family illness. 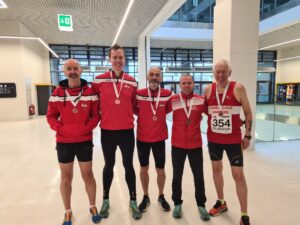 The club was well represented across the age groups in the West District Team for the Inter District Cross Country Championships, selection for which was based on performances in the December West District Championship. U13 boy Jamie McCarthy justified his selection when finishing 8th out of the 12 west runners. At under 15 level both Olivia McNichol and Sam McCarthy acquitted themselves well. Millie Nicholl ran superbly to finish overall 4th and was 3rd counter for the victorious west squad. Abbie McClue was unfortunate to be very unwell on the day and understandably had to retire from the race. Her under 17 counterpart Lewis Roddis also made the counting 6 for the 2nd placed west team while Jonathan Dow recovering from Covid stuck well to his task. In the final race of the day both Mike Christoforou and Fraser Stewart, albeit a little lethargic from his Covid booster 2 days before the event, contributed to the west seniors taking 2nd team spot. Cameron Smith has also made a promising start to 2022 when he was crowned Nottingham Cross Country Senior Champion and 2 weeks later recorded first place in the North Midlands League before finishing 9th in the Midlands District Championships. Hill running specialist Colin Donnelly, now resident in Hawick recorded 2 comfortable M60 victories in the Borders Cross Country League. 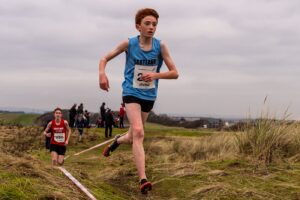