The Scottish Masters Cross Country Championships took place at Johnstone in very windy conditions. Fortunately the rain held off for the 2 races. The masters men impressively made their mark on an individual and team basis across the age groups lifting 3 individual gold, 2 silver and 1 bronze along with team gold and silver.
The opening race combined the women and over 65 menâ€™s championships. Unfortunately Bernie Oâ€™Neil did not make the ladies starting line due to injury. However, M65 members Frank Hurley and Peter Ogden started. Frank ran superbly to break away in the closing stages from defending champion Tony Martin with Hamiltonâ€™s Andy McLinden in third spot. Peter secured 12th place in his age group. 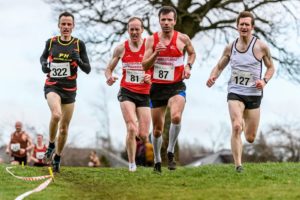 Frankâ€™s golden performance was to spur on Cambuslangâ€™s athletes in the M40 to 64 age categories. After the first half mile it was clear that the Cambuslang M40 team would be retaining their team title as the club had 5 runners in the top 10. The positions of the 5 athletes chopped and changed as the race unfolded with Ben Hukins initially spearheading the Cambuslang challenge before Kerry-Liam Wilson took up the mantle. Club captain Iain Reid and Kenny Campbell, who unfortunately had lost both spikes in the mud, were in close pursuit while Gordon Robertson was losing ground. Kerry-Liam in his first cross country race since 2016 crossed the line in 4th place but was 2nd M45 behind the Central AC pair of Ross Houston and Scott Brember and East Kilbrideâ€™s Grant Baillie. Iain, Ben and Kenny occupied 5th, 6th and 7th position to convincingly retain their title ahead of Corstorphine AC and Giffnock North. There was an additional bonus for Iain as he was awarded M40 bronze. Gordon finished a very respectable 15th in his first race as a M40 and his fellow M40 club mates crossed the line in the following order â€“ Johny MacNamara, Graeme Gallie, Tony McCutcheon and Simon Gold. 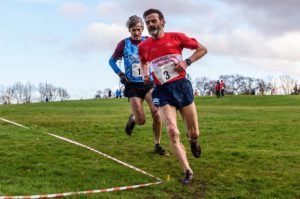 The M50 team race was to prove a more difficult challenge for Cambuslang to defend their title. Perth Road Runners lived up to being pre race favourites by packing their 3 counters in 4th, 5th and 6th positions as opposed to Colin Donnelly, Eddy Stewart and Chris Upson in 3rd, 7th and 9th place thus achieving a 4 points victory with Shettleston 3rd. However, there was consolation for the Cambuslang trio as Colin and Eddy won individual M60 gold and silver medals with Chris securing M55 gold. Colin and Eddy have the distinction along with Bill Stoddart of being the only 3 master men to have won individual cross country gold in the M40, 45, 50, 55 and 60 age groups. A large contingent of local athletes continued to cross the line in the order of Dave Thom, Mark King, Mick Oâ€™Hagan, Paul Thompson, club president Des Dickson, David Marshall, Dan Oâ€™Connell and Iain Crawford. The unfortunate Stan MacKenzie was forced to retire from the race when going over on his ankle. 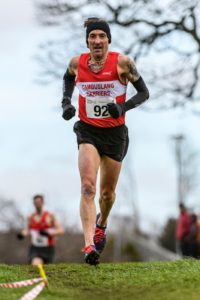 The team success of Cambuslang in the M40 and M50 competition is truly remarkable. Over the last 25 years the M40s have won 19 gold medals, 4 silver and 1 bronze. In the 10 year life span of the M50 team event the club has gained 8 gold medals and 1 silver. This wonderful record is testimony to the excellent team spirit among its members and to the support given by its coaches, officials and supporters. 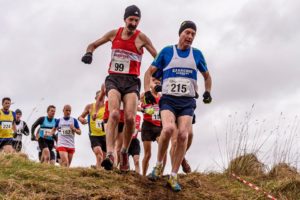