After adjusting some teams due to late call offs, team manager David Cooney was confident that the club would give a good account of itself in defending both M40 and M50 masters titles and attempting to improve upon last year’s 3rd place for the senior men’s team.  His confidence was rewarded once again with some fine performances.

After a misty morning in Livington, the athletes lined up for a midday start in somewhat cold and breezy conditions, with the relay legs alternating between a short leg (3.1m) followed by a long leg (5.8m). 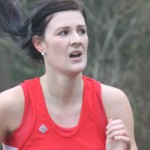 Caitlin on the 1st leg

Caitlin Hendry was our only lady athlete to make the start line.  It was great to see her back competing again and she ran a very competitive sub 20 min time on the first leg to finish 14th. 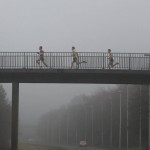 Stuart Gibson leads the field over the curly bridge

5 RHC mens teams lined up on the 1st leg.  Club captain Stuart Gibson forced the pace early on and eventually came home 1st to hand over to Kyle McLellan for the 1st long leg. Kyle ran a great leg on his course debut (6th fastest long leg) to come home in 2nd place, only 28 secs behind in-form British internationalist Andrew Butchart from Central AC (fastest long leg). Next off was Anglo Ian Rawlinson who ran a stormer to close the gap to only 18 seconds at the end of lap 3, recording the 2nd fastest short leg of the day. With the 3rd placed team over 3 minutes behind it was already clear that only RHC had any chance of stopping Central AC from making it a hat trick of victories in this race. Ben Hukins took off on the 4th leg and despite recording the 7th fastest long leg time, he couldn’t prevent Central AC from opening a lead of just over 70 seconds. Josh Lilly took over on leg 5 and produced the fastest short leg time of the day, closing on the leaders with every stride, with the gap at the end of lap 5 reduced to only 9 seconds. In form Robert Gilroy took off on the anchor leg but Central AC showed their class once again to open up a comfortable lead that they maintained to the line, and despite Robert posting a top 10 fastest long leg time the team had to settle for the silver medals 63 seconds behind worthy winners Central AC but well clear of 3rd place Corstorphine AC.  In achieving the silver medals RHC were only 13 seconds away from their club record time. 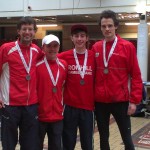 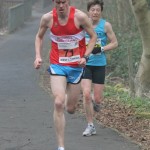 Meanwhile the M40 vets had made a solid start to the defence of their title, with relay debutant James Healy finishing the 1st leg in 2nd place. Experienced Jamie Reid took over and had us only 11 seconds behind new leaders Corstorphine AC after leg 2. The placings remained the same after leg 3, with Scott Hunter keeping us well in touch, with Kirkintilloch Olympians and Shettleston in 3rd and 4th place. Kerry-Liam Wilson was off next in the 4th leg and put the team into the lead for the 1st time, recording the fastest long leg overall in the M40 race, with doubt cast on the course taken by the now 2nd and 3rd placed teams behind. On the 5th leg Mick O’Hagan ran another solid leg as Kirkintilloch Olympians took the lead by 9 secs at the end of the penultimate lap. Greg Hastie was assigned the last lap and it took all of his experience to slowly close the gap on the Kirkie athlete. 7 seconds behind with 1.5 miles to go, the encouragement from the club members urged Greg on and he drew level with only 200 yards to go in the tightest finish of the day, but his explosive sprint meant there was only going to be one winner and the title was going home once again to Cambuslang for the 4th consecutive year.  As an added bonus the vets finished in 9th place overall to give RHC 3 teams in the top 10. 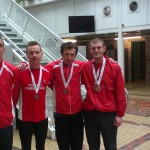 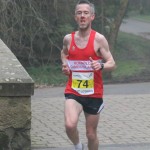 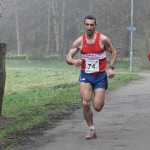 Greg Hastie powering the M40’s to a last lap victory

The M50 team had also started with their intentions to the fore as Ross Arbuckle built up a 1st leg lead of nearly a minute over Central AC and Bellahouston RR to hand over to Dave Thom. Although still building up his fitness, Dave put the team first in electing to do a long leg and his 100% effort resulted in an increased gap of 75 seconds over 2nd place Lothian RC after leg 2. Frank Hurley, running his 1st ever short leg over this course, recorded the fastest M50 3rd leg to hand a 2 minute lead to Colin Feechan on the anchor leg, and this was increased to over 3 minutes as Colin recorded the fastest M50 long leg of the day.  This was another title retained by RHC as Carnegie H and Central AC finished 2nd and 3rd overall. 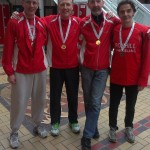 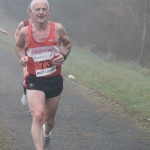 Barnie on the 1st leg 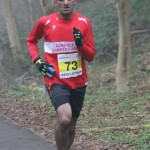 Shaz on the 2nd leg with his faithful water bottle 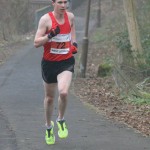 Al Campbell powering on during the 3rd leg 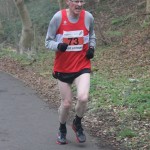 David Cooney on the 3rd leg 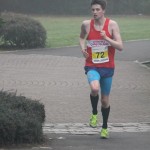 Although not in the medals, the Senior B team finished in 7th place overall, ahead of all but 4 other “A” teams. This was due to fine performances by Shaun Butler, Gordon Robertson, Al Campbell, Bobby Bristow, Johnny MacNamara and Kenny O’Neill.

Our other incomplete team saw a welcome return from Barnie Gough on leg 1, supported by Shaz Hakeem, David Cooney and Robert Rossborough and a big thanks to Jim Orr who stepped in to help with the team management to allow David Cooney to compete. 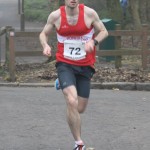