The Scottish Veteran Harriers held a trial at Tollcross Park for the upcoming Masters XC International Event to be staged in Dublin in November.  In the 4 different male age groups between the ages of 35 and 54 the first 3 finishers would gain automatic selection with an additional 3 athletes being selected on known form.  Similarly in the older menâ€™s age groups the first 2 finishers would be selected along with a further 2 on current form.   Cambuslangâ€™s Paul Thompson in finishing the first M65 in the 6K event gained automatic selection.   Itâ€™s remarkable how Paul manages to keep himself fit in spite of his multi globe trotting trips throughout the 5 continents.  He and his wife Jan make Michael Palin look like an amateur!  Four other Cambuslang athletes also clinched their places in the 8K trial race.  M35 Stuart Gibson, M45 Justin Carter, M55 Chris Upson and M60 Dave Thom will have the honour of representing Scotland in Dublin.  M60 Colin Feechan in 3rd position just missed out on automatic selection but was later awarded one of the discretionary places available.  Club President Des Dickson finished a good 5th in the M60 category.  M55 Kevin Newberry who has been showing excellent form over the summer had to miss the trial on account of injury but has been given one of the 2 remaining places.  Mark Gallacher was also deservedly given a spot in the M50 team thanks to his consistently high performances throughout the year.

Craig Jardine who is now working and living in Oxfordshire took part in the St Andrews University West Sands 5K while on a visit back home.  He showed good form to come home comfortably in first place.  Craig has 2 other races planned in Scotland this year namely the Scottish XC Relays in late October and the West District XC Championships in early December.  Moving onto the hills Kieran Cooper finished a very creditable 4th in the gruelling 2 Breweries Hill Race which involves a distance of 30 kilometres and a 1500 metres ascent. 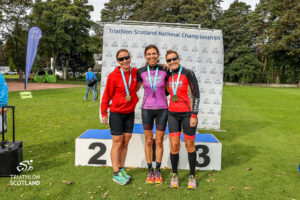 Members of Cambuslang Harriers were among the medals in the Scottish Duathlon Championships held also in St Andrews.  Both Kirsty Oâ€™Brien and Debbie Comer lifted the gold medals in their W35 and W50 age categories while W45 Nathalie Brohan and M60 Stan Mackenzie were bronze medal recipients.

Cambuslang athletes have also been performing well on the roads.  Fellow masters Iain Nicholl and Peter Farmer represented the red and whites in the Berlin Marathon where Iain dipped under the 3 hours mark with Peter just outside it.  Iainâ€™s participation had been in doubt due to injury in the weeks leading up to the event.  However, having just shaken off his injury he put in an impressive display of even paced running over the full distance.  There were M50 victories for Mick Oâ€™Hagan and Mark Gallacher in the Balloch to Clydebank Half Marathon and the Linlithgow 10K races while Paula McCabe finished 3rd lady in the Half Marathon with the added bonus of recording a personal best time.  Down South Cameron Smith opened up his autumn/winter season by clocking the fastest time on stage 4 of the 6 Man Midlands Road Relay Championships to help his English club Notts AC to team victory.   The Scottish XC Relays at Cumbernauld are also in his plans.

Over the last 2 weekends there have been Parkrun first placings for Ian MacDonald, Paula McCabe, Gordon Robertson, Justin Carter and Kerry-Liam Wilson in addition to Gordon and Dave Thom establishing M40 and M60 age group records. Husband and wife, Colin and Kathmar Dow, who joined the clubâ€™s development group during the Covid lockdown have continued to significantly reduce their Parkrun times. They initially came along to the club to support their son Jonathan, a promising U17 athlete, and then started to take part themselves in the sessions for novice runners. This has resulted in the two 50 year old masters now proudly posting times of 24.26 and 24.59 for 5K. Neither of them had ever envisaged being able to record these times until having become involved in group training. At the same time Colin and Kathmar both deserve credit themselves for their consistent and regular attendance on club training evenings and also their coach Karen Goldie who offers them support and guidance.
David Cooney