The British Masters Cross Country Championships for athletes over the age of 35 was held this year at Grant Park in Forres, Morayshire. The local club Forres Harriers with generous support from the council and local food and drink businesses ensured that the runners were well looked after. While the weather was very cold with some snowflakes falling early on the parkland and hill trails were firm for the 232 entered runners. 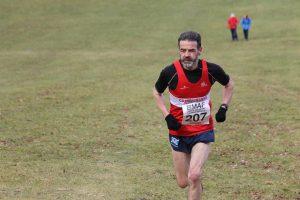 In the opening 6K race the over 65 men ran alongside all the female competitors. In the team competition the aggregate times of the 3 counting athletes would decide the medal places and it could not have been much closer in the M65 event. When the results were announced the Cambuslang trio of Frank Hurley, Barnie Gough and David Cooney had pipped the local Inverness team by just 3 seconds with Clydesdale Harriers taking the bronze medals. There was a bonus for Frank as he won individual silver. It had been touch and go up to a few days before the race whether the Cambuslang team would be able to participate as Frank had to take a weekâ€™s enforced rest due to injury and David had missed 4 weeks training due to flu. Both Frank and Barnie now have the distinction of being members of the first Cambuslang teams to have won British M40 gold in 1999 and now M65 gold. 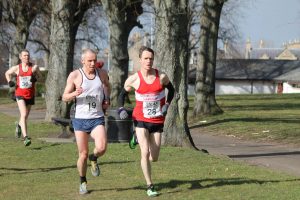 In the 8K race for all male athletes from the age of 35 to 64 a decisive team victory was achieved by the over 55 trio of Colin Donnelly, Alick Walkinshaw and Frankie Barton who had also been a member of the 1999 M40 winning team. With Colin securing the individual M55 title and Frankie the M60 bronze Cambuslang finished ahead of South London Harriers and Warrington AC. Spare a thought for Cambuslangâ€™s unfortunate Stan MacKenzie, who on the comeback trail to full fitness after a prolonged injury, went badly over on his ankle at the mid way point while being the clubâ€™s second counter. Stan was forced to retire and a subsequent X ray revealed a chipped ankle bone. The club wishes him a speedy recovery. 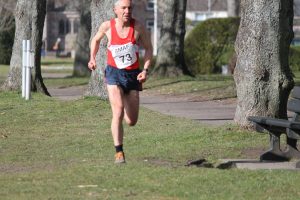 Surprisingly given that a British Championship was being held in Scotland Cambuslang had only one other competitor. Justin Carter in the M45 category built on his recent good form to perhaps run his best race ever to capture individual silver sandwiched between 2 English runners.

There was further success for Cambuslang Harriers the previous evening at the Cambuslang and Rutherglen Sports Council Awards when the club lifted the junior and senior team awards and Kirsty Oâ€™Brian won the senior female award for her duathlon and triathlon achievements with Drew Pollockâ€™s exploits in the junior category being also recognised.