The 10th Annual Down by the River 10K and 3K races sponsored by Achilles Heel, MacDet and BG Fencing were held in dry conditions in sharp contrast to last year's heavy rain.  Cambuslang impressively supplied the first 7 runners from the 172 finishers. 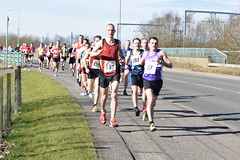 After a head to head battle between Robert Gilroy and Stuart Gibson Robert proved the stronger in spite of having raced and won the Stranraer  Half Marathon the previous day.  Iain Reid was a good third followed home by Ben Hukins, Gordon Robertson, Shaun Butler, first veteran O40 Frank McGowan and Gordon McIntyre.  Not surprisingly Cambuslang won the team prize.   The club also supplied the first veteran O60 in Sandy Eaglesham. 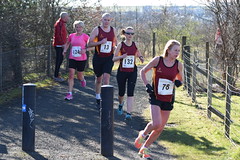 In the lady's race Hungarian athlete Fanni Gyurko who had finished 5th in the previous week's Scottish Cross Country Championship smashed the course record while finishing 13th overall in the race.  Alex Lamond from the host club was second and led Kirsty Anderson and Vikki Semple to team gold.  There was further success for our ladies with Lyn Angley securing the Veteran O40 prize. 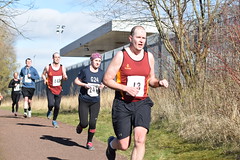 Cambuslang runners were also prominent in the accompanying 3K event.  U17 athlete Gavin Smith led from start to finish with his U17 team mate Eamon Carr in third.  Both athletes had helped the club to win the Scottish Cross Country title the previous week.  U13 Niamh Riggins was second female to add to her Scottish U13 1500 metres bronze medal the day before. 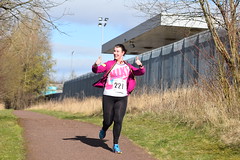 Special thanks is due to Owen Reid for his role as race director with support from Iain Crawford and to Colin Feechan and Dave Thom who were responsible for race registration and results and to all our members who helped on the day to make the race a success.  The club also appreciates the continued support of our sponsors Achilles Heel, MacDet and BG Fencing and also to Morrisons' Supermarket who provided the post race water and fruit.  The final thanks goes to Motherwell AC who provided such a large turnout in the 10K and indeed to all our entrants. 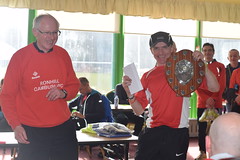