Junior, senior and masters athletes of Cambuslang Harriers travelled to Kilmarnock to participate in the West District Cross Country Relays on Saturday 12th October. Senior and masters men teams comprised of 4 runners, 3 for their female counterparts and 3 athletes, one under 13, 15 and 17, were required for the young male and female teams.

It was a very successful day for the seniors and masters as the senior and masters men won double gold and the female masters took the bronze medals. This was the first senior men team victory since 2012 while the masters men continued their ten year monopoly of victories. The female masters are making their own history in this event by adding team bronze to their gold medals from last year and from 2016. 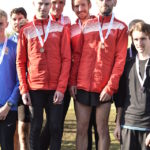 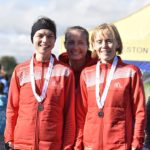 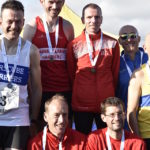 The senior men quartet of Stuart Gibson, Kevan Harvey, Fraser Stewart and Ryan Thomson were comfortable winners from Shettleston Harriers and Kilbarchan AC whilst our 4th placed B team of Drew Pollock, Jamie MacKinnon, Craig Jardine and Alasdair Campbell narrowly missed out on the bronze medals. From 280 competing athletes Ryan, Fraser, Kevan and Alasdair recorded the 2nd, 6th, 7th and 8th fastest times of the day. It was also impressive for the over 40 A team of debutant Stuart McGeachy, Ben Hukins, Stevie Wylie and Kenny Campbell to occupy 9th spot from 70 finishing teams and for our under 20 team of Ryan Donnelly, Chris McLew, Ruairidh MacGregor and Andrew Carey also to gain a top ten slot. Our 5th team to cross the line was also well placed in 14th position thanks to Struan Paton, Gordon Robertson, Colin Reilly and Matthew McKenna. Our 2nd masters team of Chris Upson, club president Des Dickson, and the comeback duo of Johnny MacNamara and Greg Hastie finished a creditable 34th. 2 other masters teams came home in 47th and 50th positions. The quartet of Dan Oâ€™Connell, Paul Thompson, David Stirling and Mick Oâ€™Hagan just got the better of Simon Gold, Graeme Gallie, Frank Hurley and John Kelly. There was also an incomplete team of Kai Newell who had his best cross country run to date, Iain Crawford and Kenny Finlayson but unfortunately they had no one to finish off their team due to a late withdrawal.

The quality of our masters men across the respective age groups was eye catching. Ben, Kenny and Stuart were 2nd, 3rd and 4th fastest M40s, Stevie was the fastest M45, Chris the fastest M55, Paul and Des were fastest and 2nd fastest M60s and Frank was the 3rd fastest in the M65 category. 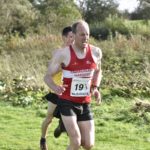 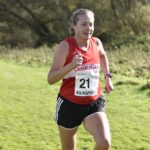 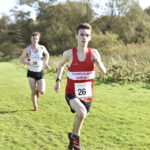 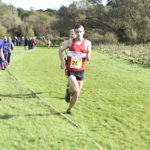 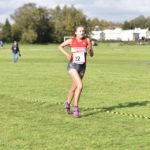 The club was able to field last yearâ€™s victorious masters ladies trio of Bernie Oâ€™Neil, Jacqueline Etherington and Jennifer Campbell who were hopeful of being in the mix for the medals. However, Garscubeâ€™s Lesley Bell showed her class on the opening leg to give her club a commanding lead which left her rivals fighting for the 2 remaining medals. Bernie in recording the 3rd fastest time by a W50 ran well to finish 6th in the W40 event and keep Cambuslang in the hunt. Jacqueline with the 2nd fastest W40 time impressively brought the club up to third place. This was an excellent country outing for Jacqueline in preparing for the forthcoming masters international event. Last leg runner Jennifer was in a difficult position with 2nd placed Troon AC a good distance ahead and Bellahouston Road Runners not far behind. Jennifer steadily started to reel in her Troon opponent but her Bellahouston RR rival was right on her tail. However, their tussle together saw them pass 2nd placed Troon in the closing stages. In the sprint to the line the valiant Jennifer just lost out on the silver medal by 2 seconds. Carole Setchell and under 20 Rachel Wardrope competed in the B team but did not have a 3rd leg runner. 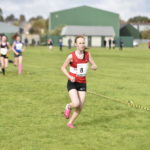 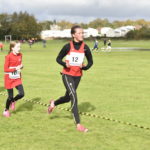 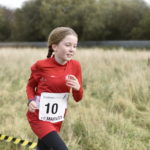 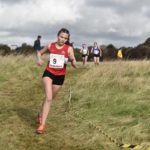 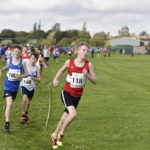 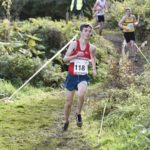 Due to the start of the school holidays a number of our younger athletes were not available to compete. The female A team of Lucy McGrandle, Abbie McLue and Susie McLaughlin combined well to finish in 7th place out of 48 finishing teams. First year under 15 Abbie was 9th fastest while under 17 Susie was an excellent 4th fastest. The B trio of first year under 13 Olivia McNicol, Eilidh Kennedy and Shona Carey were 24th with the remaining team of Amy McGoldrick, Francesca Fairweather and Peggy Nan Rodger 38th.

Their male team A counterparts took 12th spot thanks to Hamish Gardiner, Fearghus MacGregor and Michael Black. A fast last lap by under 17 Jack MacKinnon after runs by Chris Black and Jay Gallacher moved the B squad up to 23rd position. Lewis Cook and Brodie McDonald ran in an incomplete team.

The club appreciate the invaluable assistance given by the coaches, officials and parents on the day and would also like to thank Dan who transported the large tent and Colin for capturing the athletes on camera.