CAMBUSLANG HARRIERS A CLUB FOR ALL RACING SURFACES

Members of Cambuslang Harriers have been busy over the last week competing at various venues such as Manchester, Istanbul, Reading, Motherwell, Dunkeld and Grangemouth on road, hill and track.  There were many notable performances. 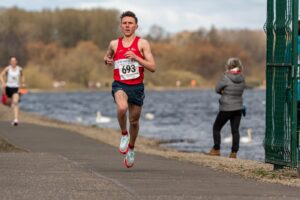 Fraser Stewart made a spectacular marathon debut at Manchester when winning the open race held in conjunction with the elite event.  In spite of tiring over the last 2 miles he recorded 2.18.40 which is the 2nd fastest time by a Scottish athlete this year.  He was unfortunate to catch Covid just prior to the Scottish Cross Country Championships but his marathon time reveals he has fully recovered.  Fraser will now have a deserved short break before building up his fitness again.  M40 Kenny Finlayson had the satisfaction of taking 2 minutes and 46 seconds off his pb just missing out on breaking the 3 hours barrier by 59 seconds.   Julie Reid spurred on by her own fan club of husband Iain, a 2.29 marathoner himself, and their 2 sons Euan and Findlay took 4 Â½ minutes off her pb to record the excellent time of 3.38.13. 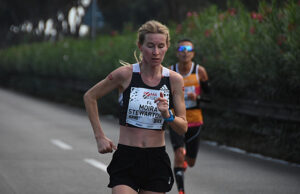 Moira Stewart returned to competitive competition after having missed the cross country season due to injury.  She certainly came back with a bang!  Moira set a Czech Republic Half Marathon record of 70.14 in the Istanbul Event which was part of the World Athletics Label Road Series.  Her time puts her 2nd to Olympian Eilish McGolgan in the Scottish rankings for this year and 6th in the UK.  While she was born in the Czech Republic, she is able to represent Cambuslang on account of her father Eddie who has been a club member for 40 years.  Colin Reilly continued to race himself back to full fitness when clocking a useful 74.20 in the Reading Half Marathon. 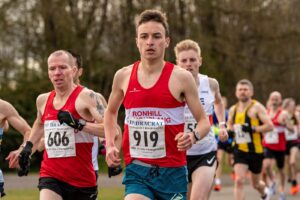 The Scottish and West District 10 Mile Road Championship held around Strathclyde Park was a rewarding day for the club.  Gordon Robertson and Stevie Wylie collected Scottish individual gold medals in their respective M40 and M50 age categories with Mike Christoforou lifting the senior silver and Erica Christie the W60 bronze.  Stevie is the only athlete in the 58 years of the event to have been awarded the senior and M50 trophies which underlines how great and enduring competitor he is.  There was icing on the cake when the combined efforts of Mike, Andrew Carey and Gordon earned them Scottish team silver.  Chris Upson and Dave Thom appeared as 2nd M50 and 3rd M60 in the allocation of West District individual medals.  Justin Carter, Shaun Butler and George Pettit were under the 60 minutes mark with Chris Upson and James Smith just over.  Dave Thom used the event as a post Covid training run and spurred on an inspired Iain Crawford to a sub 75 minutes clocking which was a significant pb by 5 minutes.  Erica Christie and Paula McCabe were next home for Cambuslang followed by 3 debutants at this distance Gerry Duddy, coach Karen Goldie and Suz Ross.  It was encouraging to see relative newcomers Gerry, Karen and Suz participating in a national championship event.  In the accompanying open 6K race Mark Gallacher took the honours as first M40 over the line with new member Georgia Freeman-Mills being 4th lady. 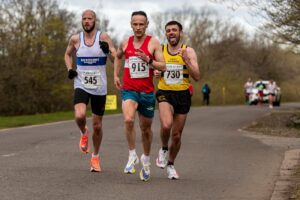 Kieran Cooper took time off his studies for his final exams at St Andrews University by winning a parkrun en route to travelling to Dunkeld for the Birnam Hill Race.  He then displayed good endurance by finishing an excellent 3rd behind leading hill running specialist Andrew Douglas.  In a contrast of surfaces Lewis Roddis, now a track U20 as from 1st April, lowered his 800M pb by over 5 seconds to post a time of 2.04.04 which augurs well for his forthcoming track season.