Cambuslang  Harriers made their presence felt at the British Masters 5K Road Championships at Horwich with the club lifting 2 team golds and 1 silver along with 2 individual golds, 1 silver and 1 bronze.  All male and female age groups from 35 upwards competed together in a well organised race around a three lap town centre course.  However, there was some confusion immediately prior to the start when the runners who were lined up across the full width of the road were squeezed into one side of the road where the chip mats were.  This resulted in several of our runners being pushed further back in the line up.  This is reflected in the wider time differential between gun and chip times for the runners concerned.

Kerry-Liam Wilson was first Cambuslang runner home in 5th place and first M45 out of a field of nearly 200 competitors.  As well as lifting the M45 title for the 3rd successive year he led team members Stevie Wylie who was just pipped for the individual bronze medal and Justin Carter to a decisive team gold in the M45-54 category ahead of fellow Scottish club Cumbernauld.   The M55-64 trio of Paul Thompson, Brian Hughes and Frankie Barton backed up by Alick Walkinshaw narrowly lost out to a strong Warrington AC squad and had to settle for the silver medals.  There was some consolation for Paul and Brian as they gained individual silver and bronze M60 medals.  The final medal successes came in the form of team gold for the M65 trio of Frank Hurley, Sandy Eaglesham and Barnie Gough and  individual gold for Frank.  Frank and Barnie now have the full set of team medals for this championship event having previously won M50 bronze and silver in 2005 and 2006.  Iain Reid was also representing the club as our sole M40 athlete and finished 5th in his age group despite suffering from a calf injury during the race. 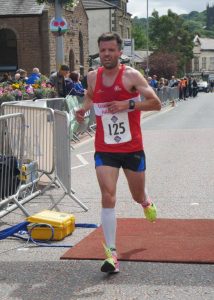 Cumbernauld continued to fly the Scottish flag by finishing first team in the M35-44 age group.  There were other individual Scottish successes with Galaâ€™s improving Darrell Hastie winning the race outright and securing the M35 title while former Scottish International Alastair Walker of Teviotdale lifted the M60 gold thus giving Scottish runners a 1, 2, 3 in this age category.  M50 Brian Scally of Shettleston used his track speed to good effect in the dash to the line to overtake 2 rivals and move into the bronze position.  Former HBT runner Steve Cairns now competing for Tynebridge added the M50 road gold to his XC victory achieved earlier in the year at Forres. 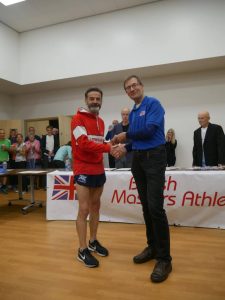 Cambuslang Harriers would like to thank Walter Hill and the BMAF team for their efficient organisation of the event.