Congrats to our over 35 and over 50 teams who comfortably retained their titles at a windy and cold Strathclyde Park today.Â  Mick O’Hagan stepped into the O35 team after a late call off from the unwell Greg Hastie.Â  Mick (21.56) did his job well to come home in 11th place.Â  Charlie Thomson with the 4th fastest time of the day (19.51) then launched Cambuslang’s advance to take the club through to 3rd place.Â  There was no stopping Kerry Wilson as he cruised round the course to take us into a clear lead and in the process set the fastest time of the day (18.57).Â  Robert Gilroy on the glory leg set the 2nd fastest lap time of 19.27 and increased our lead 3 minutes and 37 seconds over Bellahouston Harriers with Kilmarnock 3rd.

The over 50 team ran a similar race.Â  Alick Walkinshaw (23.07) in his first season for us brought the club home in 7th spot with club treasurer Colin Feechan (22.25) moving us up to 4th place.Â  Club secretary Dave Thom with the fastest over 50 stint of 20.59 proppelled Cambuslang into a useful lead.Â  It was left to Frank Hurley (22.15) to consolidate our lead of 1 minute and 55 seconds over Victoria Park/Glasgow with Central AC 3rd. 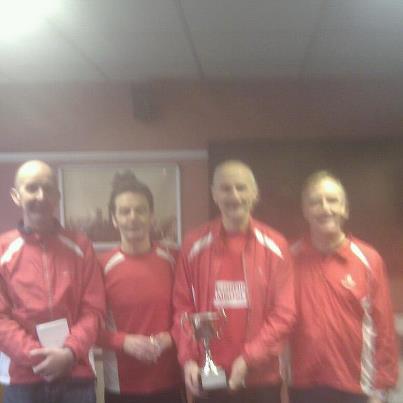 We were pleased to finish 2 other teams.Â  Barnie Gough, Sandy Eaglesham, Edie Carr and Robert Anderson made up our second over 50 team and Alan Ramage, Dan O’Connell, Davie Fairweather and Peter Ogden were running as our B over 35 team although the latter 2 runners are in the over 50 category.Â  It was encouraging to see Alan Ramage make his comeback after a lengthy injury as well as Dan O’Connell showing promise in his debut race for the club.

The final icing on the cake came at the presentation when Frank Hurley, Sandy Eaglesham and Barnie Gough were belatedly but deservedly awarded the over 55 UK 1/2 marathon team gold medals, an event which had taken place in early October.

The club would like to thank Alastair McFarlane, Aida Stewart and their committee for successfully organising today’s event for which there was a record turnout.