RHC are the new senior men’s Scottish Trail team champions, with outstanding individual and team performances at the picturesque sun-drenched village of Falkland, Fife on Saturday 25th May 2013. With 6 finishers to count in this 15km race superbly organised by Fife AC, RHC were led by recent Scottish XC champion Wegene Tafese, supported by 2nd fastest long leg runner from the 6-stage relays Josh Lilly and a number of our XC team medallists to ensure that we had 8 starters from the club.
The 10k ladies race was first away with Edel Mooney of Lothian claiming individual victory and Edinburgh AAC securing the team title, feedback was that the course was very tough but enjoyable.
The senior men’s race consisted of 1 small followed by 1 large loop, with a mixture of road, hard and loose track, and forest paths taxing the legs of the runners, mixed in with a few inclines!. RHC athletes were in the leading pack from the on-set, with Wegene and Josh being joined by the talented duo of Stephen Trainer of Greenock and Kyle Greig of Forres, and the medals would be fought out by these athletes. The chasing group consisted of Ben Hukins, Robert Gilroy and Iain MacCorquodale of RHC, Ross Houston of Central AC and Mark Pollard of Inverclyde. Wegene and Josh pulled away on the big lap, with Wegene easing away in 1st place on the long uphill, eventually finishing 1 minute ahead. Josh had to keep pushing as Stephen Trainer was never far behind, and the gap at the end was only 12 seconds, with Kyle Greig only 20 seconds further back. However a great 1-2 for the club, and with 6 finishers inside the top 12 (Ben Hukins 5th, Robert Gilroy 6th, Iain MacCorquodale 9th and Davy Munro 12th), the team title was secure. Colin Feechan in 25th (3rd vet) and Mick O’Hagan in 36th completed our finishers. Helped by the weather and the usual efficient organisation, this event is sure to go from strength to strength in future years. 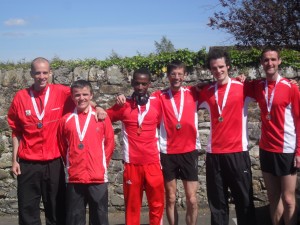