Members of Cambuslang Harriers had a very successful day at the Scottish Trail Race Championships held on Saturday 2nd September at the Falkland Estate in Fife.  Conditions were warm and dry for the very undulating and testing course. 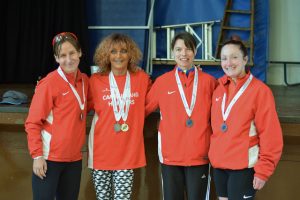 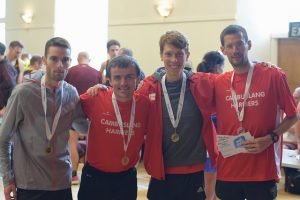 The senior/masters male quartet of Ben Hukins, Alasdair Campbell, Robert Gilroy and Kevan Harvey in 4th, 5th, 6th and 10th place packed well to claim victory from Inverness Harriers and HBT.  The club maintained its monopoly of the men’s team title having now recorded 5 consecutive victories since the inception of this race in 2013.  Robert lifting the O40 masters men title was a further boost for the club.  Justin Carter who was next home for the club narrowly missed out on the O40 masters bronze medal.  Michael Barker, Iain Nicholl, Simon Gold and Iain Crawford were next to finish. 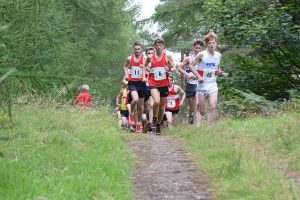 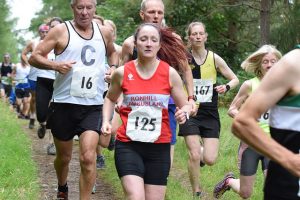 The senior and masters women competed in the same gruelling 10K race as the men and did the club proud by securing team bronze behind host club Fife AC and Garscube Harriers.  Kirsty O’Brien, Jennifer Reid, Erica Christie and Lesley McArdle combined well to give the club its first Scottish senior/masters ladies team award in this event.  There was further icing on the cake for Erica who was the first O60 lady to finish.  Coach Lynn Angley provided back up support as our 5th finisher.  Both Kevan and Lesley in their first year with the club picked up their first Scottish team medal as did Kirsty although she is no stranger to winning Scottish medals in duathlon and triathlon events. 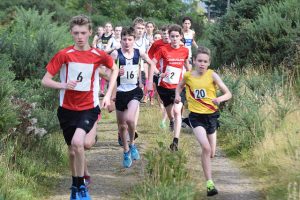 The U17 boys and girls added to the club’s overall haul of medals.  Drew Pollock who has had an excellent track season won his age group having led the 5K event from the front and with support from Keir Crawford and Andrew Carey the trio lifted the silver medals.  The female trio of Holly Brock, Kelly McCutcheon and Ruth Kelly went one better to capture the gold medal.  There was further medal success for the U15 boys who took team silver thanks to Aaron Grew, Michael Black and Zak Povey.  Sean Friel and Robbie Woods followed in. 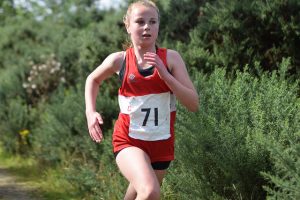 The U13 3K race for boys and girls was not a championship event but was designated as a development trail run.  Fearghus MacGregor in 4th place led home team mates Lewis Roddis and Michael Byrne while Eva Ritchie in 6th position headed home Millie Nicholl, Eilidh Kennedy, Cara McDowall and Morvern Cameron. 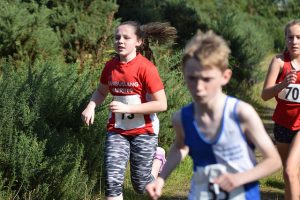 Given the unaccustomed warm weather and hilly nature of the course all our runners can be pleased with their efforts.   Thanks also to our coaches and parents present on the day and to our ubiquitous photographer Colin Stephen for the encouraging support they all gave to our athletes and to Fife AC for organising the competition.