A Virtual Event Combined with the Inter District Competition

The first Virtual Road Event of 2021 dovetailed with the customary January Inter District Event between athletes from the East, North and West Districts. Normally selection for the Inter District Competition is based on performance in the preceding December District Races. However, due to the cancellation of live races on account of the Covid 19 lockdown, the Inter District scoring for the 6 different age groups was to be based on the top 15 eligible counters in the virtual event, male and female, from each of the 3 Scottish Districts. A healthy entry from club members across Scotland was therefore expected given the incentive of being a possible counter for the athleteâ€™s district of residence. Surprisingly this was not the case as the overall entry including Cambuslangâ€™s was down on previous virtual events possibly due to the recent icy conditions, the proximity of the previous virtual competition and the preference to get on with training rather than doing another virtual time trial. 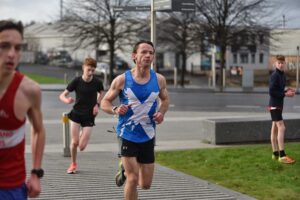 Cambuslang had 5 participants in the seniors/M40 age group, 1 in the M50 and and also 1 in the under 15 category and were to play an important role for the West District team. The 2 overall quickest M35 runners Stuart Gibson (26.35) and Ian Hodge (27.30) and the 3rd fastest W45 Jennifer Campbell (35.14) for their 8K stints helped the West team to a decisive win. Mark Kingâ€™s time of 29.54 secured the 2nd fastest placing in his age group and again contributed to another West victory. Although M40 athletes George Pettit (29.51) and David Scott (33.51) did not score for their district both can be pleased with their efforts. George had the consolation of being a member along with Stuart and Ian of the winning menâ€™s team in the virtual competition. It was another encouraging performances by Ian who only joined the club during lockdown. 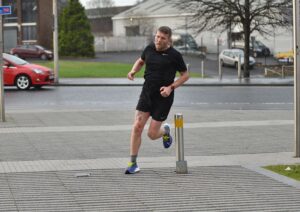 Under 15 Sam McCarthy in his first year in his age group recorded a nippy time of 14.13 for 4K which assisted the West team to 2nd place in the Inter District Competition. Sam deserves great credit for keeping his training going during the Covid 19 lockdown. David Cooney